Open-access and Copyright:
©2022 Norwood D et al. This article is an open-access article distributed under the terms of the Creative Commons Attribution License (CC-BY) which permits any use, distribution, and reproduction in any medium, provided the original author(s) and source are credited.

Sample introduction in the GC-MS analysis is a relatively complex, multistep process, where usually a liquid sample is introduced to an injector, evaporated, and transferred to the GC column. To achieve reliable quantitation, the process must be well controlled. In the past decade or so, GC-MS based relative responses were evaluated for hundreds of extractables with the benefit of using those relative response factors for quantitation or to create databases to somewhat bridge the existing gap to estimate the amount of non-identified analytes. No data has yet been published indicating how relative responses are impacted by different injection solvents, or when the evaluation level is addressing the sub µg/mL levels. This paper presents data sets for 74 impurities (0.5-5 µg/mL range), with multiple internal standards, using 8 injection vehicles. Based on the presented data, the injection vehicle has a significant impact on the relative response factors, and therefore the quantitative assignment of the impurities.

Chemicals of common extractables were purchased either as individual chemicals or as pre-prepared, certified mixtures from Millipore-Sigma (St. Louis, Mo US) or Restek Corporation (Bellefonte, PA, US). The list of the chemicals with their CAS numbers used in the study are listed in Table 1. The combined mixture of the analytes contained 78 analytes plus 4 Internal standards. The GC injection vehicle solvents included 2,2,4-trimethyl-pentane (isooctane), methylene-chloride (DCM), cyclohexane (chex), ethyl-acetate (etac), dimethyl-ketone (acetone acet), toluene (tol), 2-propanol (isopropanol or IPA) and ethanol (etoh) and were purchased with the highest available purity (trace or pesticide grade) from Millipore-Sigma. Solvent details presented in Table 2. The water and the ethanol:water 50:50 (v/v%) solvents were not used in the study, however, the expansion volume calculations are presented in a footnote for comparison to the evaluated solvents.

2.1. Internal standard used for the study

A multicomponent mixture-EPA base—neutral- which consisted of 4 different analytes was included to address different chemical nature, chromatographic retention, and chromatographic behavior. The d5-nitrobenzene provides low response (compared to the other IS chemicals in the mixture) and is relatively polar and eluting early, the 2 fluoro-biphenyl elutes at the middle of the chromatogram and the d10-pyrene and the d14-terpenyl eluting in the latter portion of the chromatogram. The internal standard was applied to compensate for variation of the injection process, and the extracted analytes were processed against the average response of the spiked IS analytes. The internal standard was also used to calculate the relative responses of each individual standard analyte. The internal standard was spiked to each standard solution at 5 µg/mL (5 ppm).

2.2. Preparation of the standards solutions for the study

Sample extracts were analyzed with GC-MS, using a Thermo Scientific TSQ-9000® triple quadrupole system with a 1310 GC module. It was equipped with a PTV injection system, which was used in a programmed temperature splitless mode at 40°C to 275°C with a 10°C/sec heating time and 0.75 min splitless time. For the chromatographic separation, a Restek Rxi 5Sil MS (cross bonded 5% 1,4-bis(dimethylsiloxy)phenylene 95% dimethyl polysiloxane) 40 m x 0.18 mm with 0.18 µm film thickness (Cat no. 43605) column (β=250) with helium carrier (Ultra High Purity, less than 1 ppm total impurities) at 1.1 mL/min constant flow was used. The oven temperature program was 50°C (1 minute hold) to 325°C at 10°C /min (3 minute hold). Electron ionization (EI) at 70 eV energy with 50 µA current with an ExtractaBrite™ ion source operated at 275 °C was used. A 10 µL gas-tight syringe was used to deliver 0.5 µL injection volume of sample to the system for analysis. The low injection volume was selected to minimize the effect of the solvent expansion volume, where the expanded solvent volumes do not reach the 80% of the liner (only ethanol went slightly above) volume capacity, and still deliver sufficient amount of analyte for detection purposes (0.5 µg/mL solution with a 0.5 µL injection volume resulting in 250 pg of analyte on-column). In order to achieve the benefits of the PTV injection (narrow chromatographic peaks, low boiling point discrimination, effective analyte transfer), the technique requires low volume liners. Injection liners for PTV injection (depending on the inlet hardware configuration), have an internal volume in a range of 0.05-0.22 mL. In our study, as we used multiple solvents for injection we had selected an inlet liner of the upper volume end for this configuration.
The GC inlet liner and the inlet septa were replaced after evaluation of each solvent to be confident that the potential issues related to the inertness of the injection path are addressed, and their contribution to the study outcome is minimized.

The analytes for the study were selected to cover a boiling point range of 151°C (C9) to 482°C (C34), and a polarity -expressed as logP- from 1.5 (phenol) to 18.2 (C34), and included components with different functional groups (nitro, aromatic alcohol, aromatic ketone, acid, aldehyde, ester), and multiple heteroatoms such as Cl, S, N, Br, F, as those analytes are well known to be sensitive for the injection parameters. As is described in the instrumental section, the PTV inlet liner was replaced after injections for each solvent vehicle to avoid formation of residues in the injector system. In the injection sequence within the same injection vehicle, the injection was performed from the lowest concentration of samples to the highest concentration samples to minimize the risk of carryover. Altogether 1,332 data points were generated for each solvent (74 analytes x 3 concentration levels x 6 replicate analysis). Table 2 in the experimental section details notable differences between the properties of the different injection vehicles. The boiling point of the vehicles covers a range of 39.7-110.6°C and the solvent expansion volume varied between 60-162 µL, therefore differences between the solvents are expected. The injection %RSD was evaluated for the 2-flurobiphenyl (2-FBP) IS and it was in the range of 5.8%-15.1% for the various solvent vehicles. As it is a most commonly used GC-MS injection solvent used by E&L testing laboratories, it was not surprising that the % RSD for methylene chloride was the lowest (lowest boiling point solvent in the study), however, it was not expected that the injection %RSD was the highest for ethyl-acetate solvent vehicle. The %RSD of the retention time of the 2-FBP was in a range of 0.01-0.03%, which translates to a less than 1 sec shift between the 8 different solvents, therefore we can conclude that the various solvents have virtually no impact on the retention time of the analytes.
If we compare the average relative responses for the methylene chloride injection vehicle generated by two different laboratories, assuming a partial overlap of the studied analytes, we can see that the overall “performance” of the databases are very similar, even when databases were created using different concentration levels. The evaluation of the two different databases is presented in Table 3.
Besides the “similar” overall database characteristic between the two presented databases, the analysis of the database records at the 0.5 µg/mL evaluation level shows a different picture. The mean of the relative responses is 27% lower than the overall mean responses, and the percentage of the low responding database records is 6.5% compared to the overall 2.9%. The increasing number for the low responding database entries indicates that the detection system reached the detection capability, analytes which provided higher relative responses at the 2 and 5 ppm concentration level. If the overall relative response is lower at the lower concentration level, and the number of low responding entries are elevating compared to the higher concentration injections, the laboratory may need to consider to generate and using database responses at low concentration, when low concentration level samples are being analyzed. This additional level of entries may be required for more accurate quantitative assessment, and the database records need to be extended to include lower concentration ranges.
A hypothetical situation for a leachable assessment is presented below, where different relative response for three different identified packaging-related impurities resulting different safety assessment requirements based on the different RRF values determined at different concentration level (Table 4). The study AET was identified at a 250 ng/mL level, therefore in the 1st case the relative response determined at 0.5µµg/mL level is being used, while in the other example the relative response for 5 µg/mL level was used. In the first case when a relative response determined at a level close to the AET is used, the calculation resulted in 500 ng/mL calculated levels for all three analytes (at or close to the theoretical values), therefore those analytes will be evaluated properly, and the toxicological risk assessment will be appropriate. Further action may include analytical method validation for those leachables present above the AET of the study. In the second case, a relative response determined at a higher level was used, and the quantitative estimation resulted in levels below the AET, therefore no further action would be recommended. According to a recently published paper by Jenke et al. quantitation errors of this type should be avoided in the safety risk assessment process [16]. This simple example highlights the importance of database entries generation and curation for quantitative purposes. The authors understand that it is nearly impossible to address every possible scenario when a database is being generated, however, it is important that the laboratory use good scientific judgment when they evaluate the finished product and do not use a “one size fits all” approach for every evaluation. 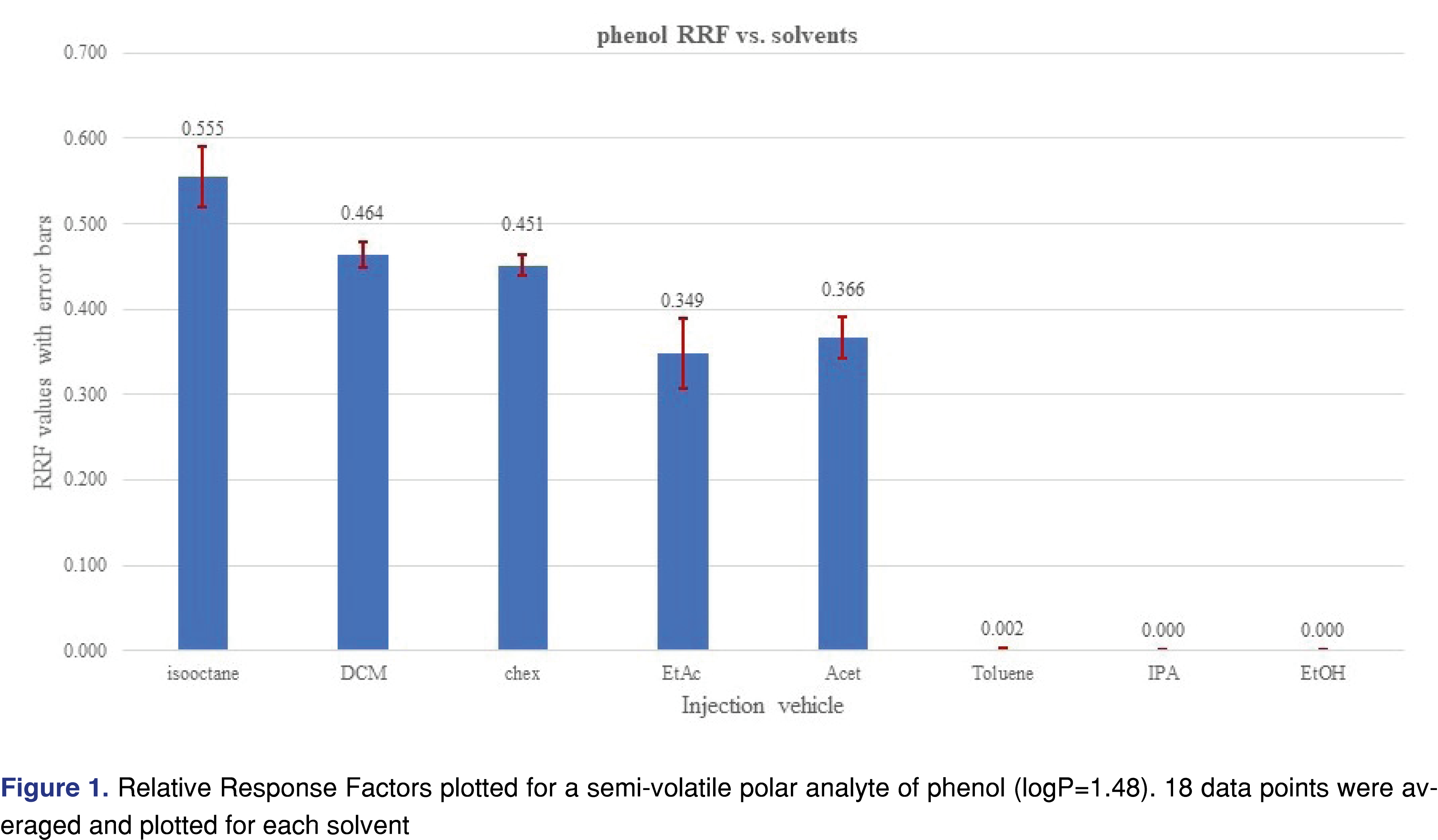 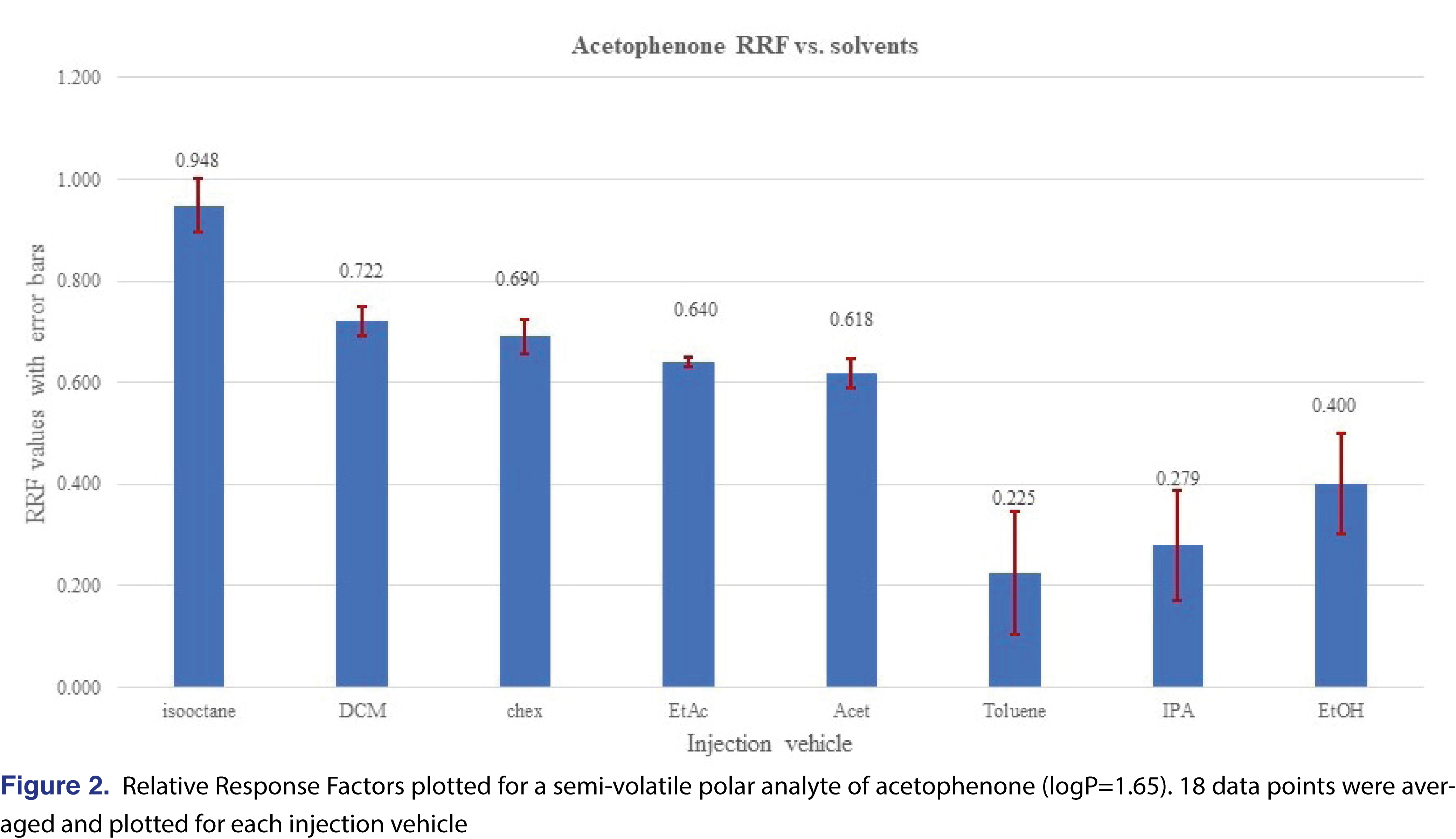 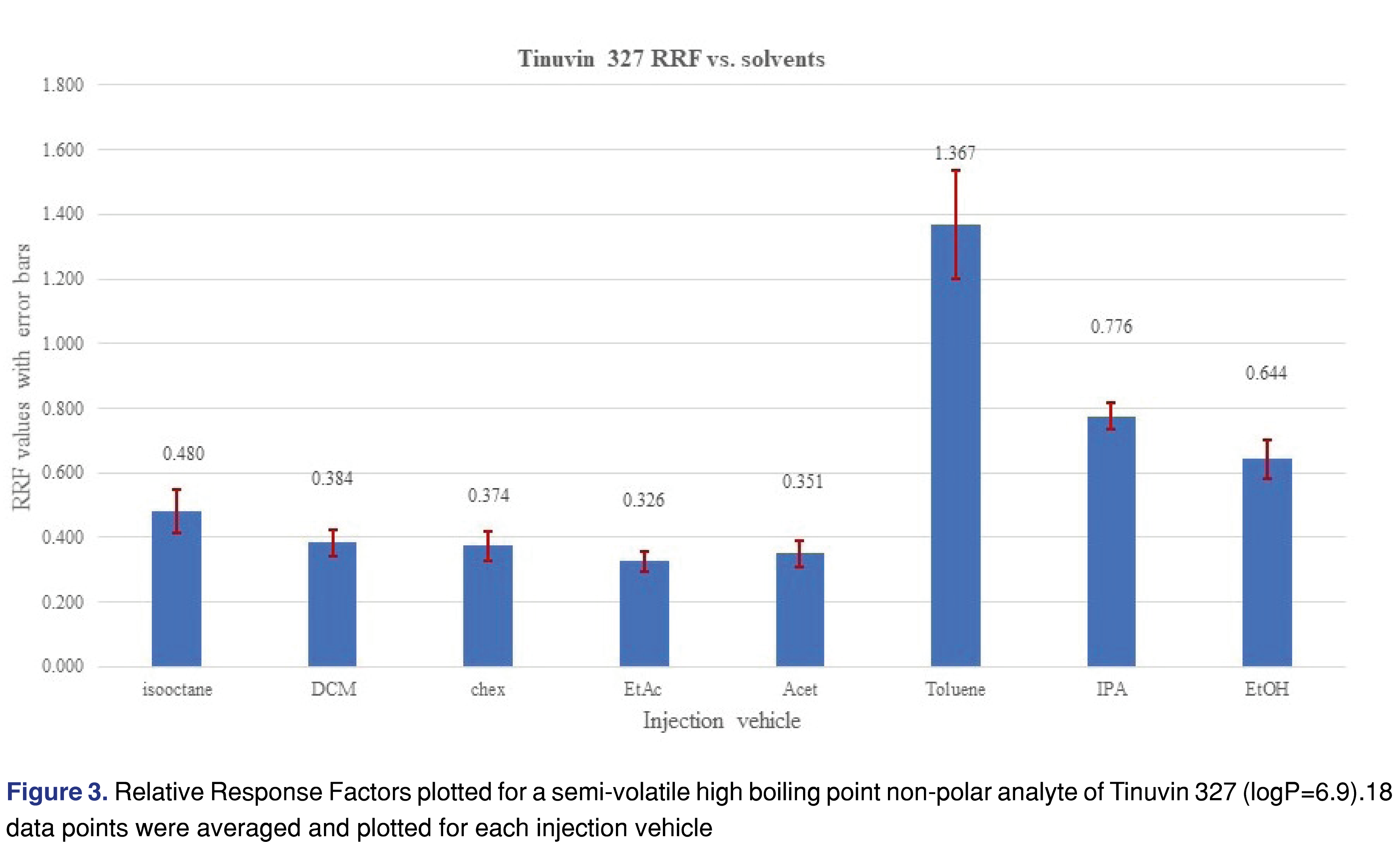 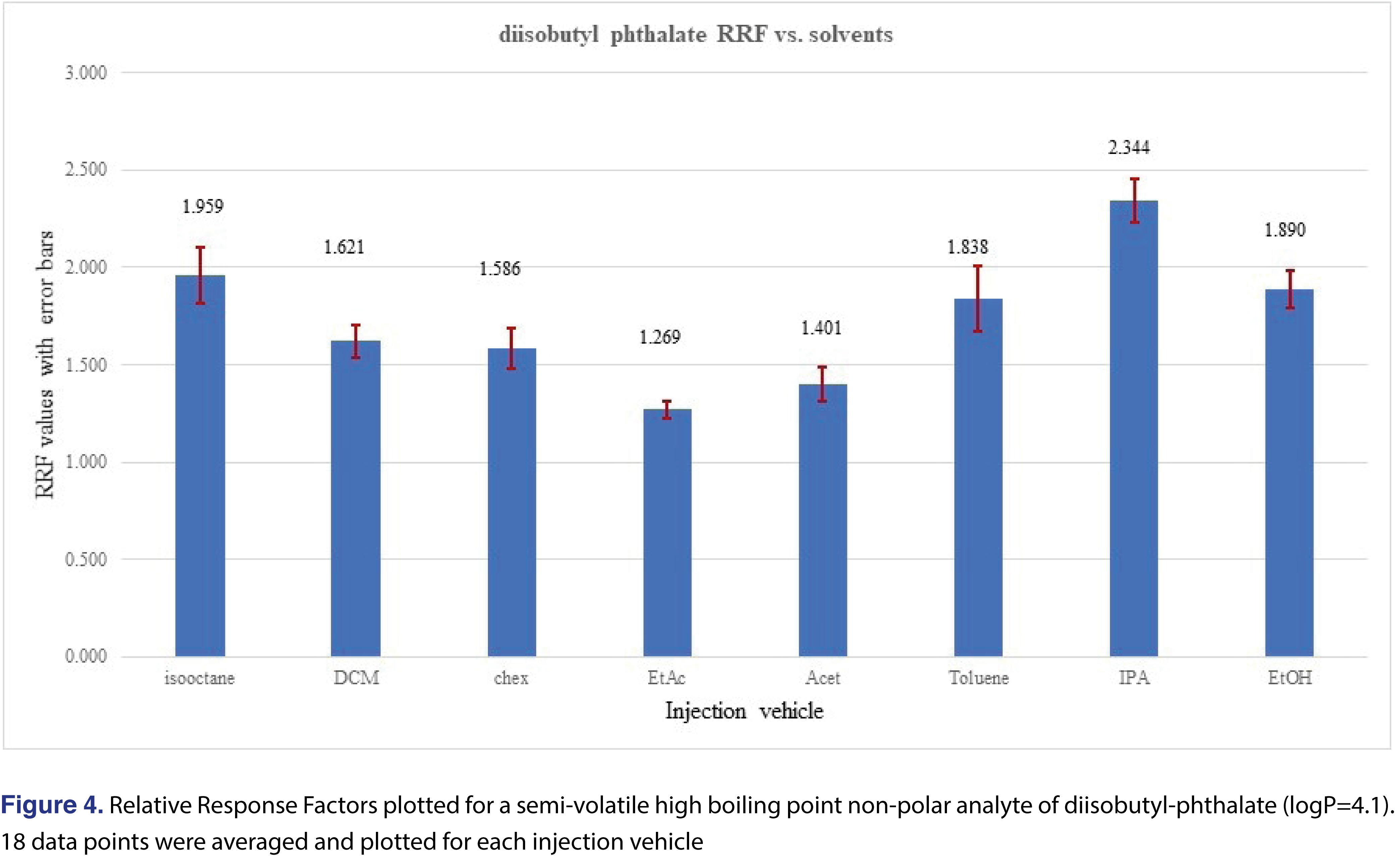 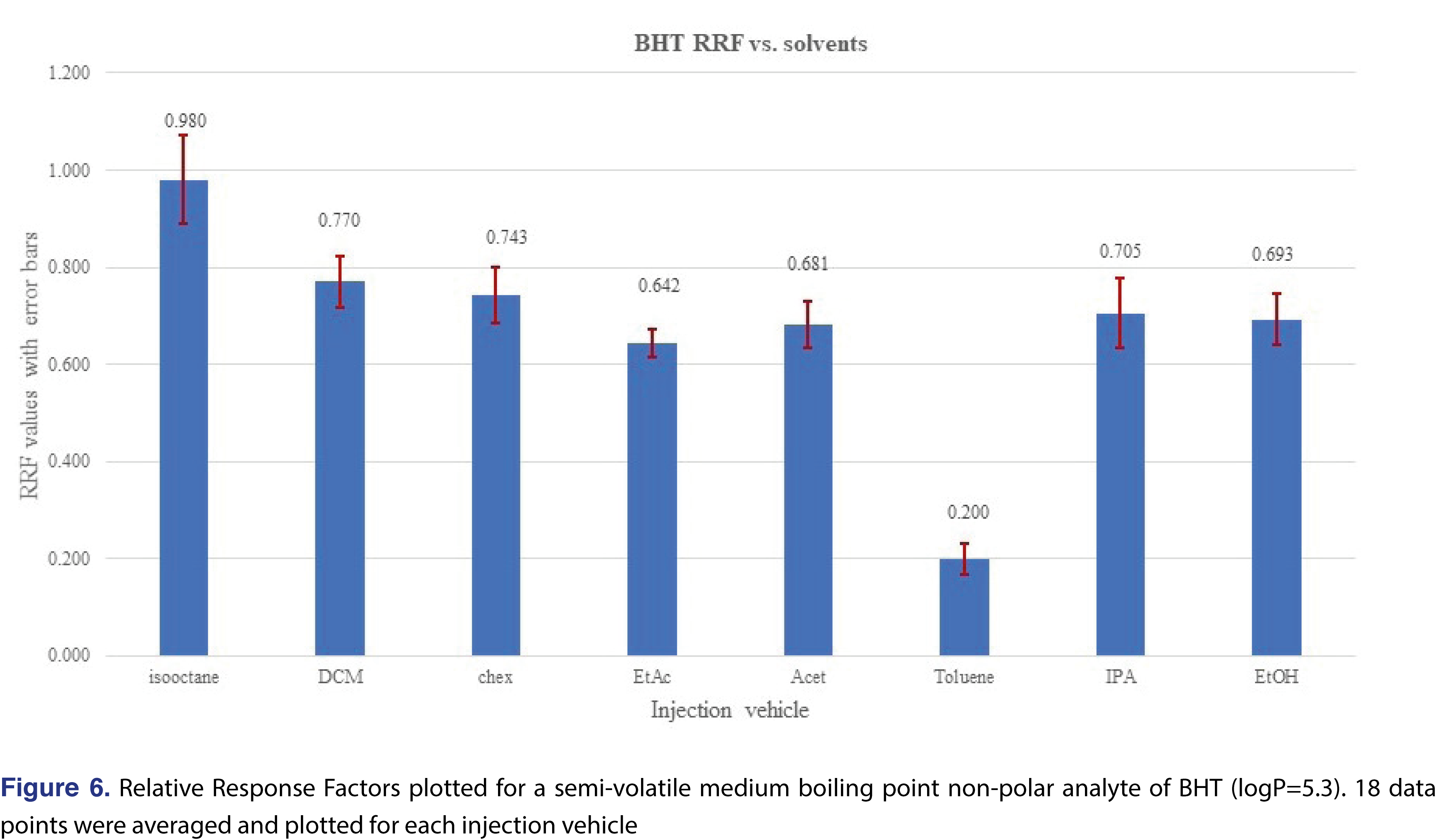 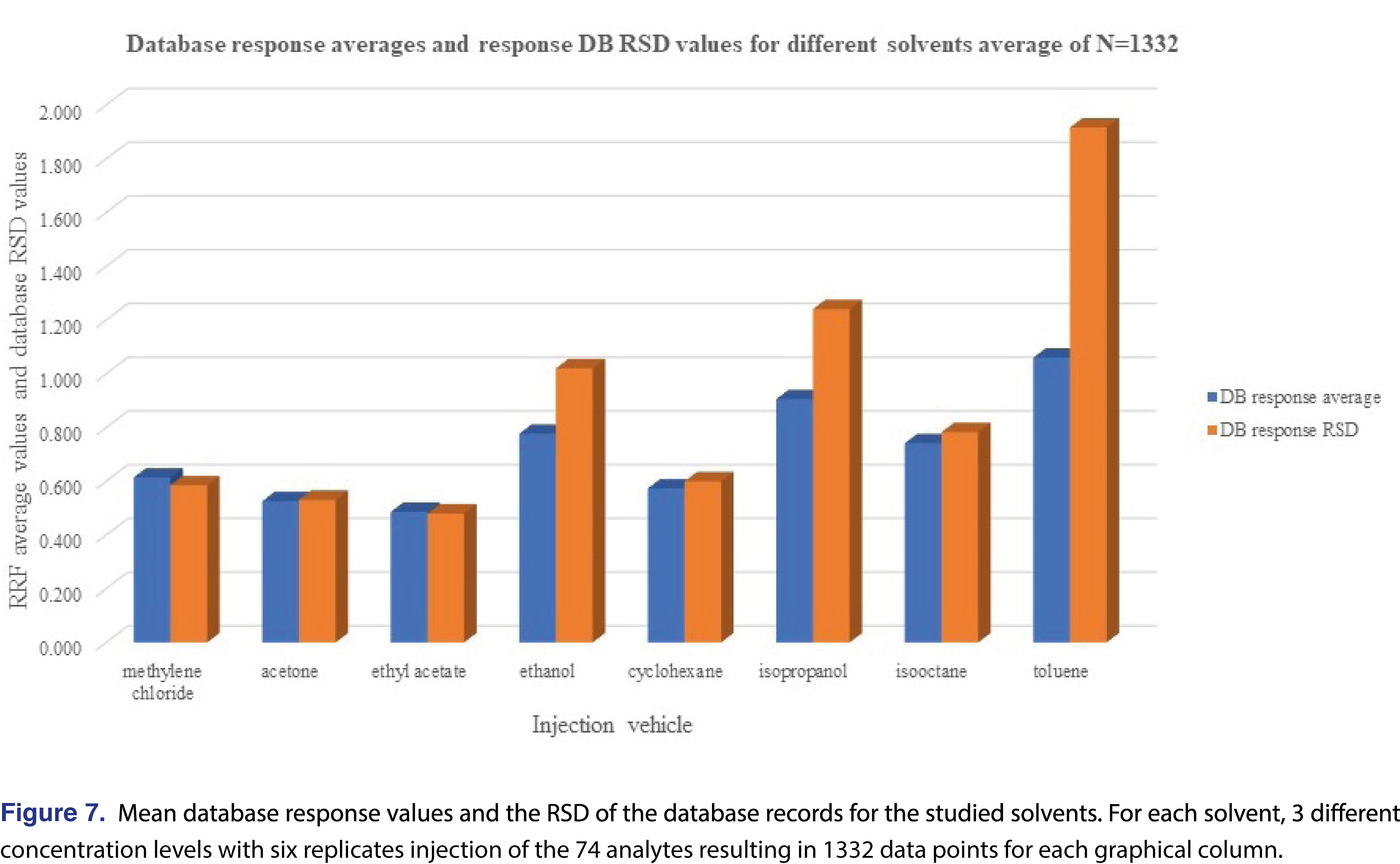 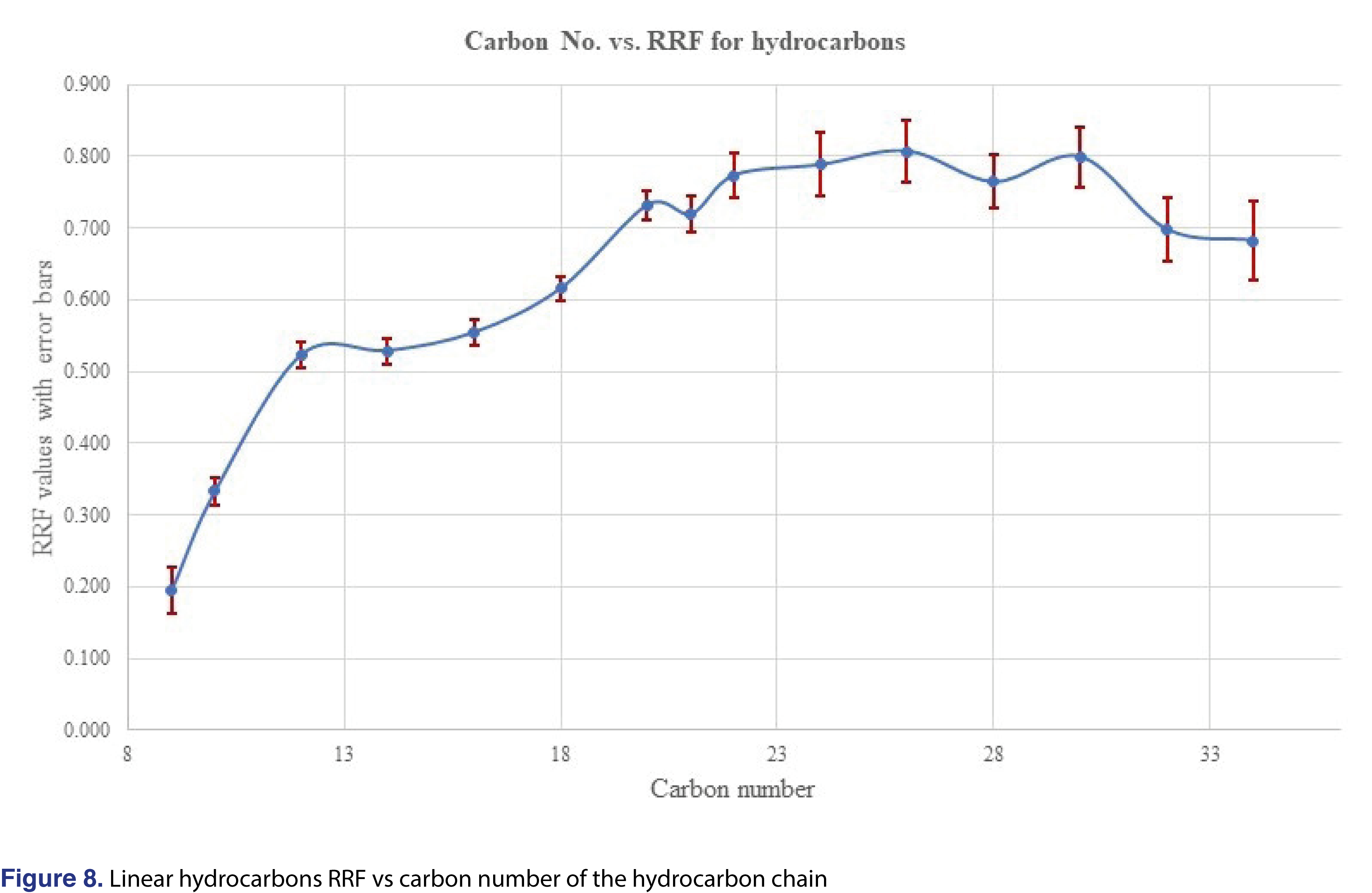 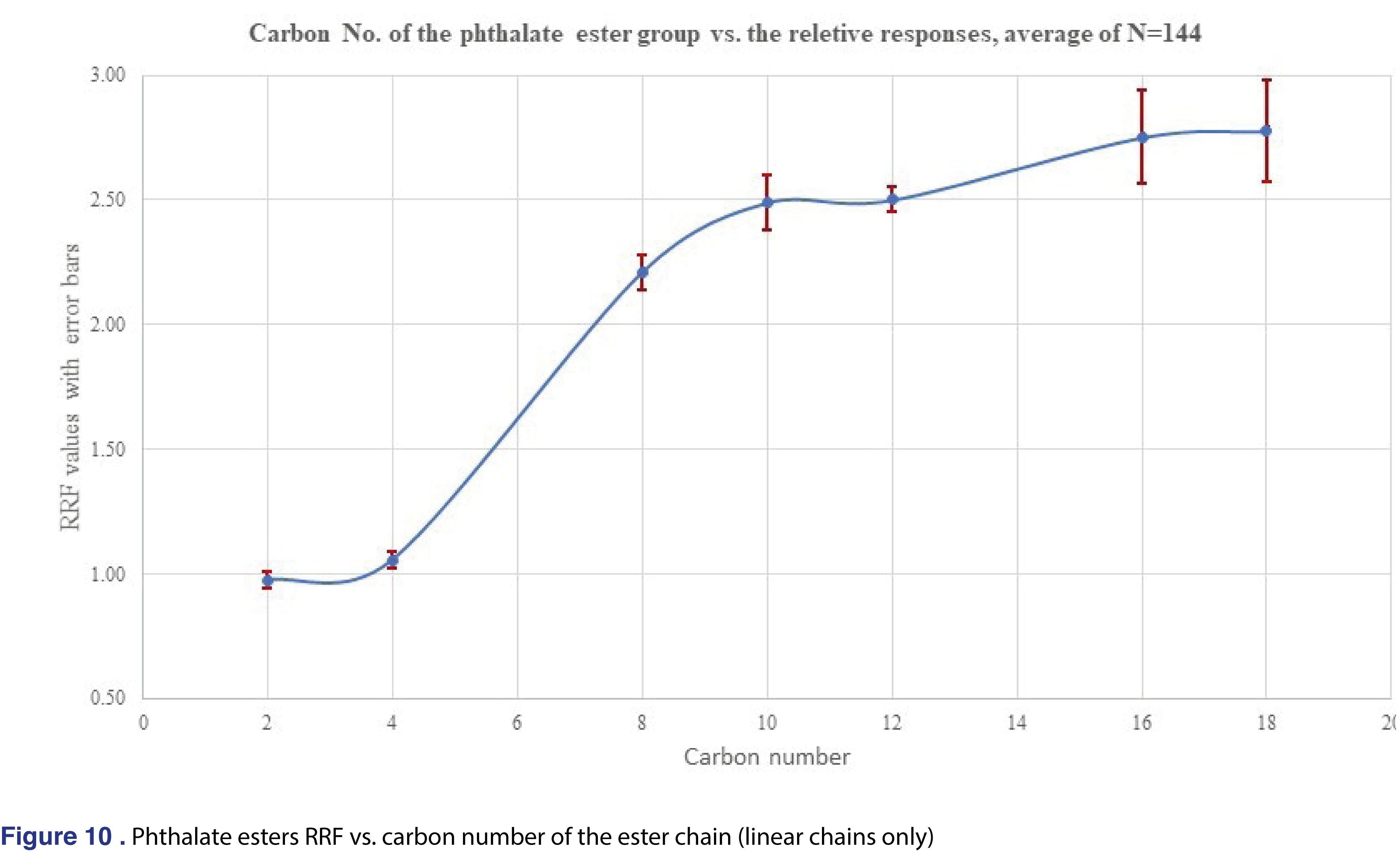 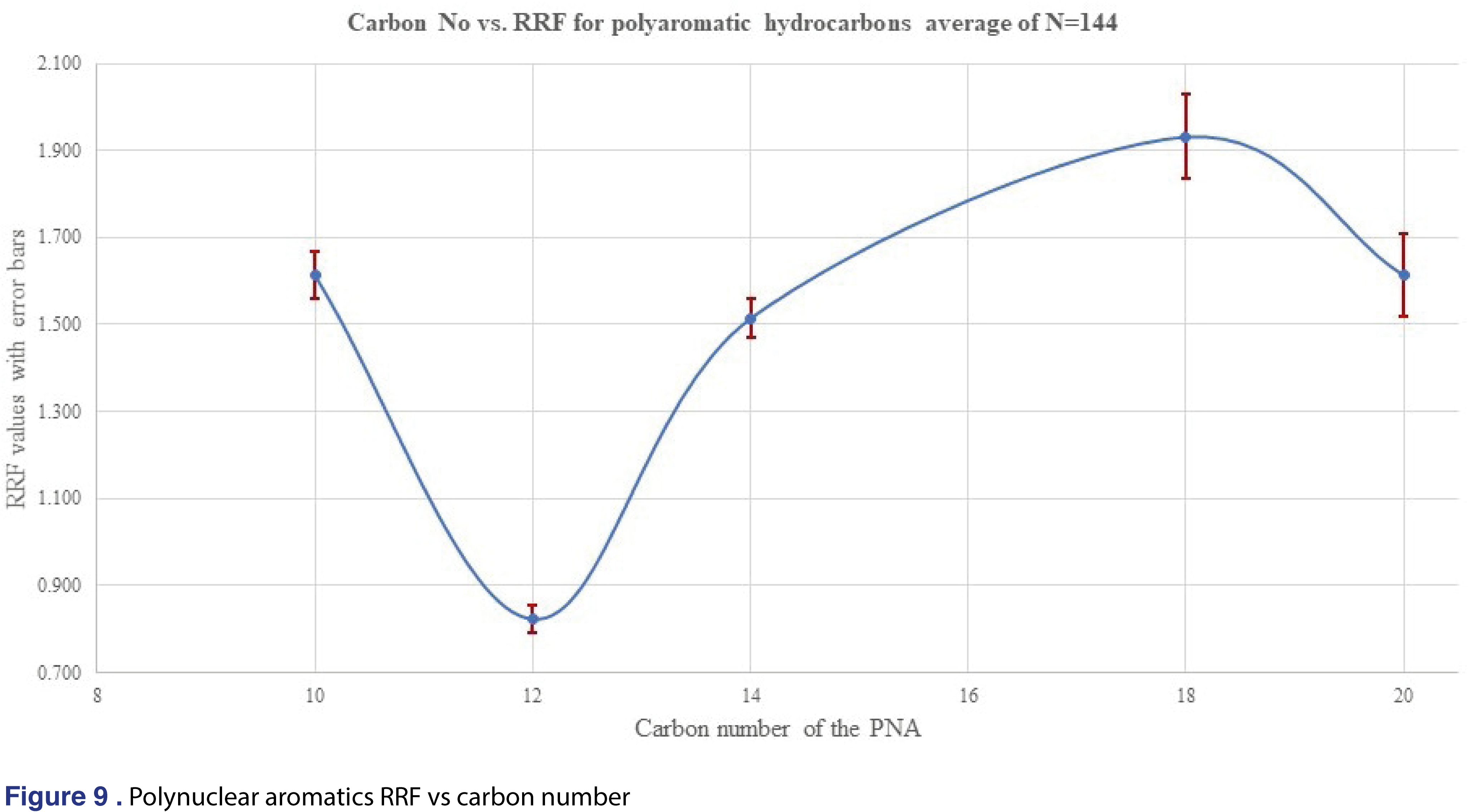 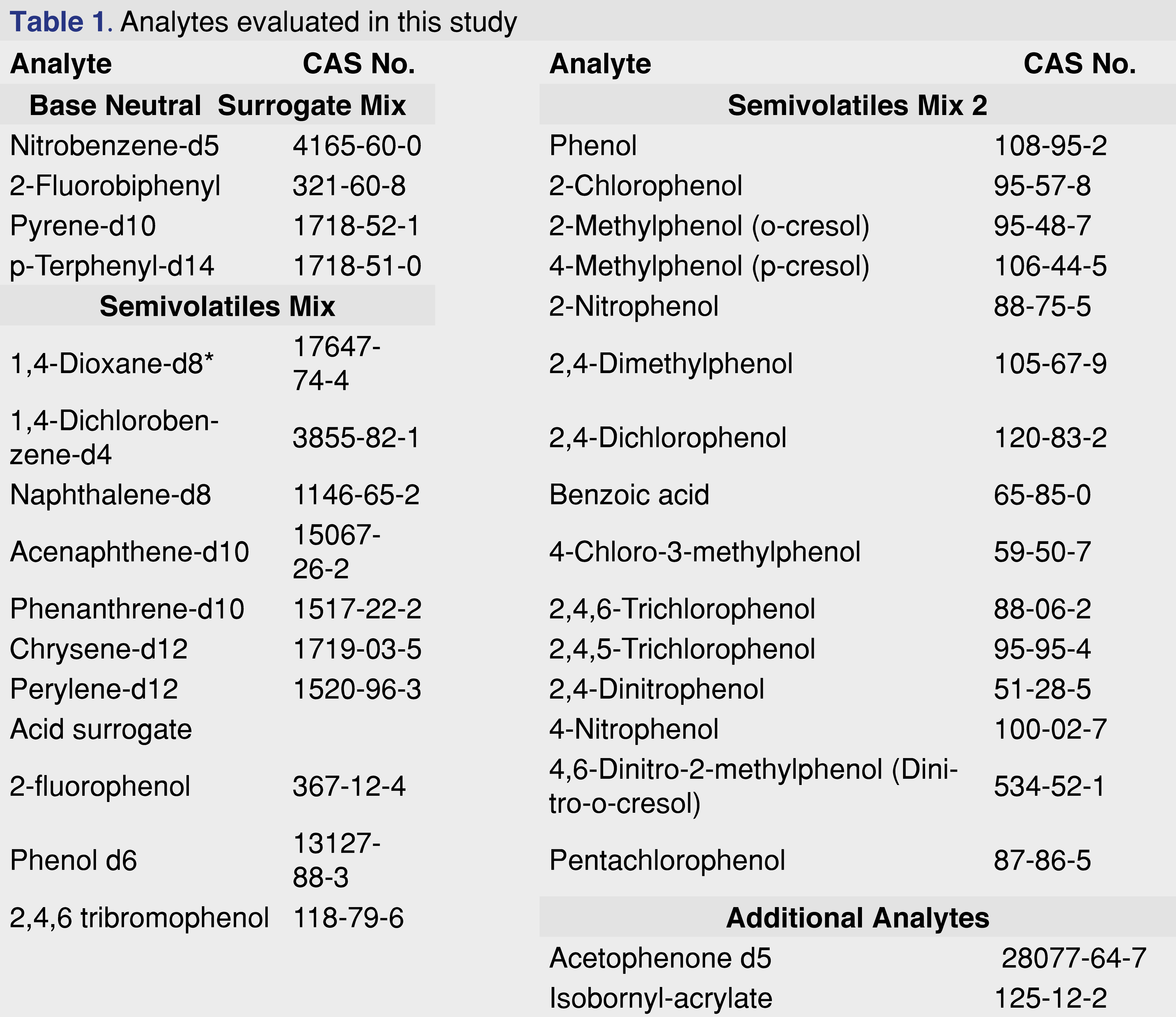 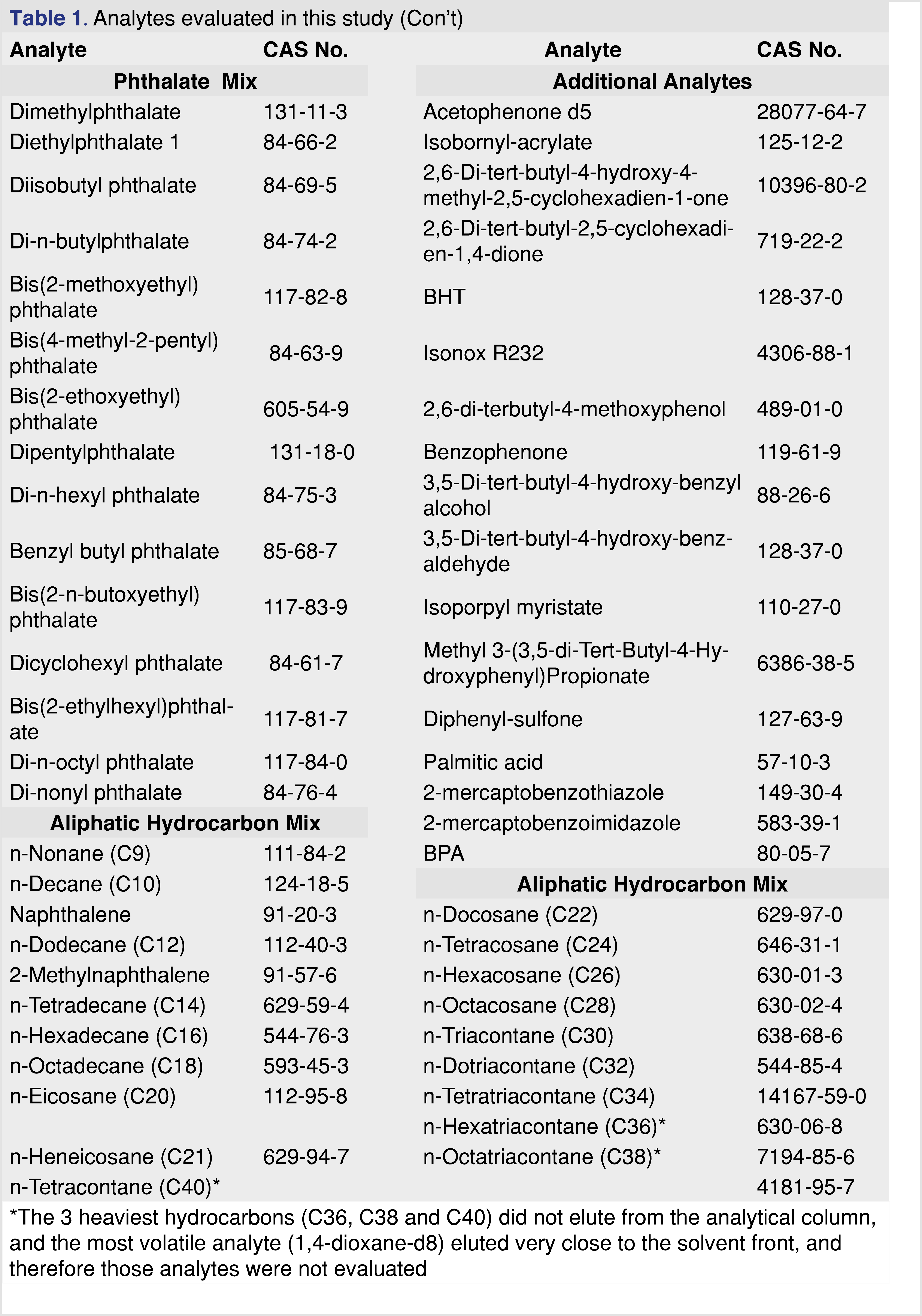 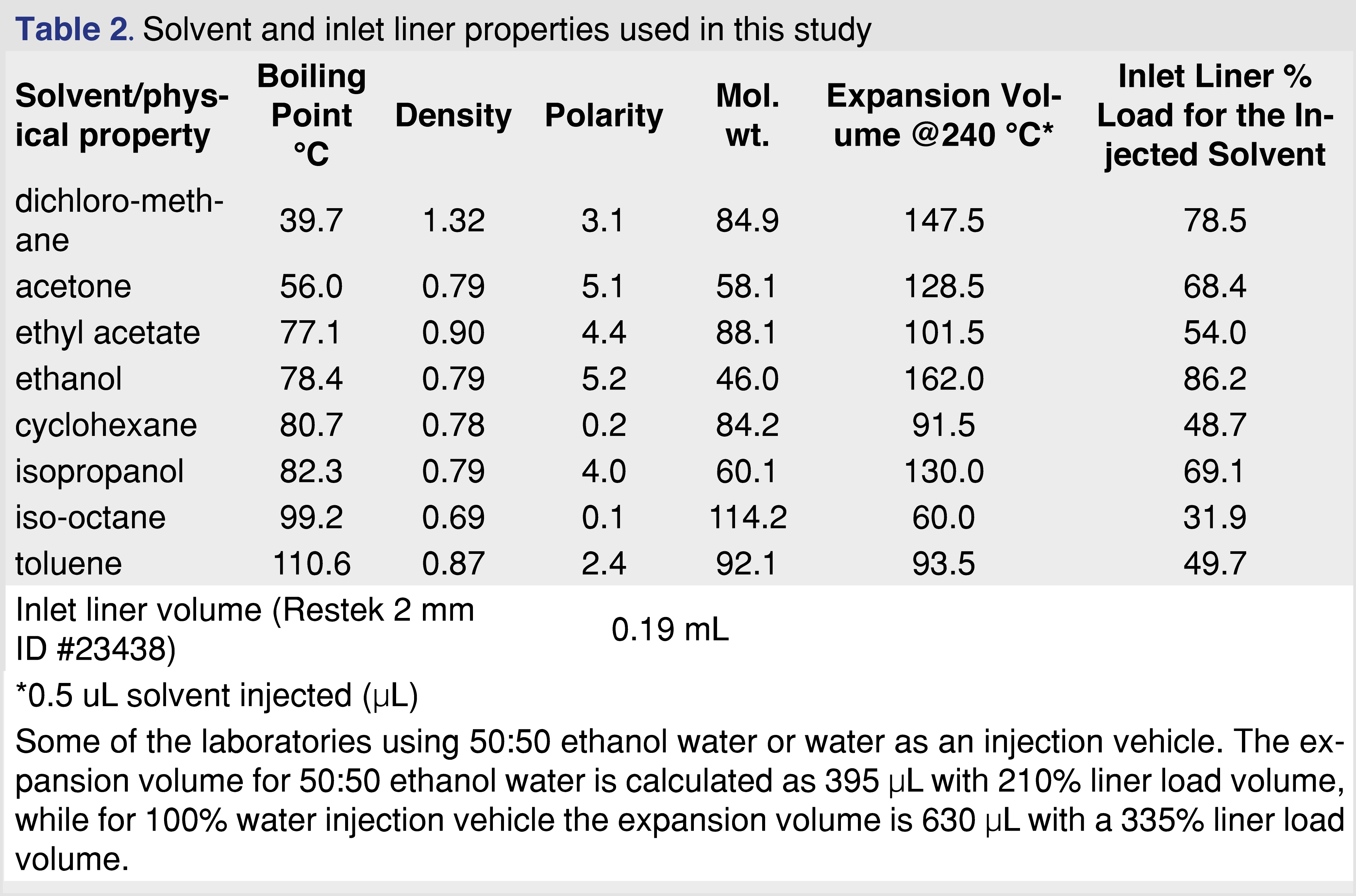 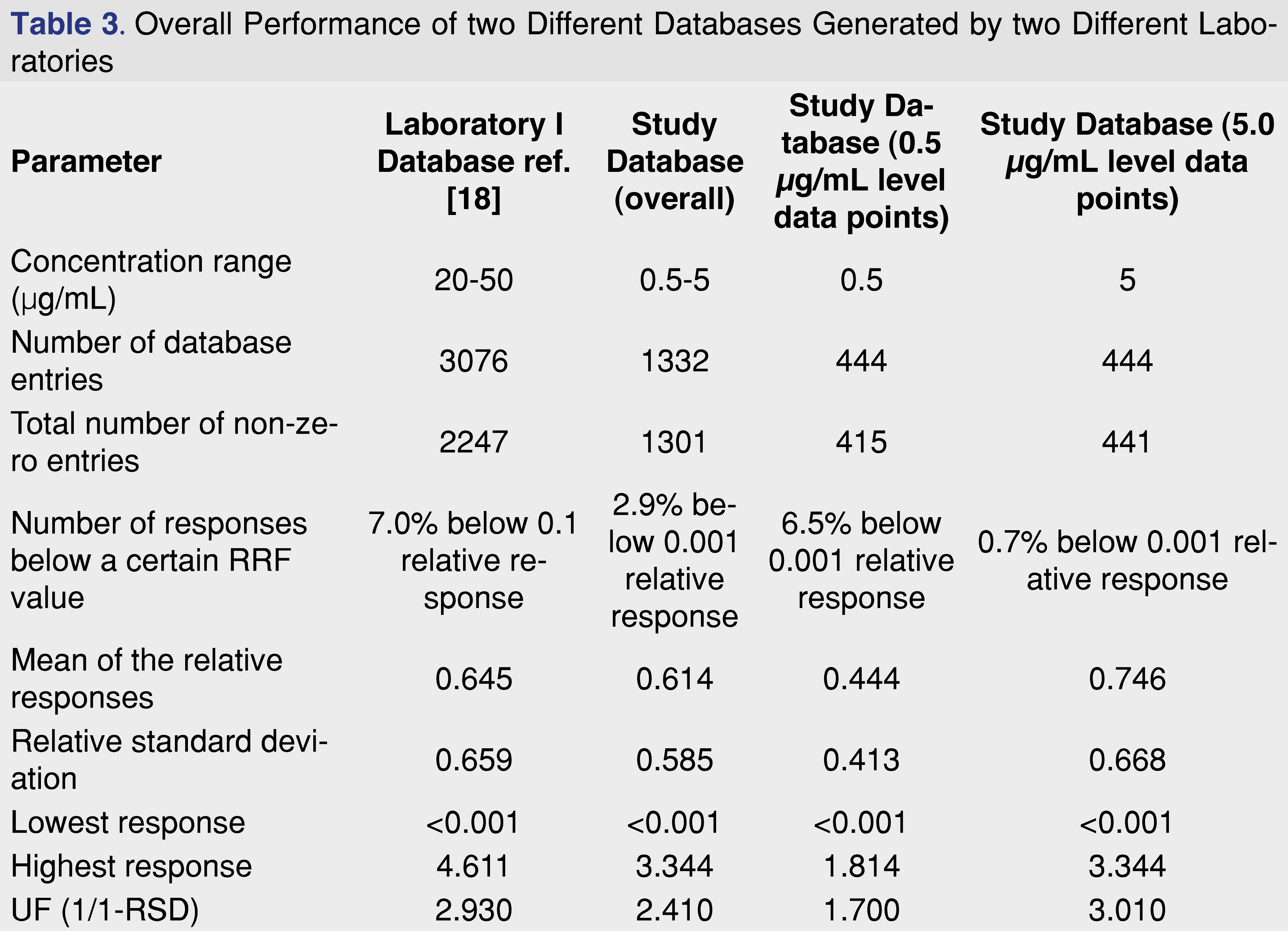 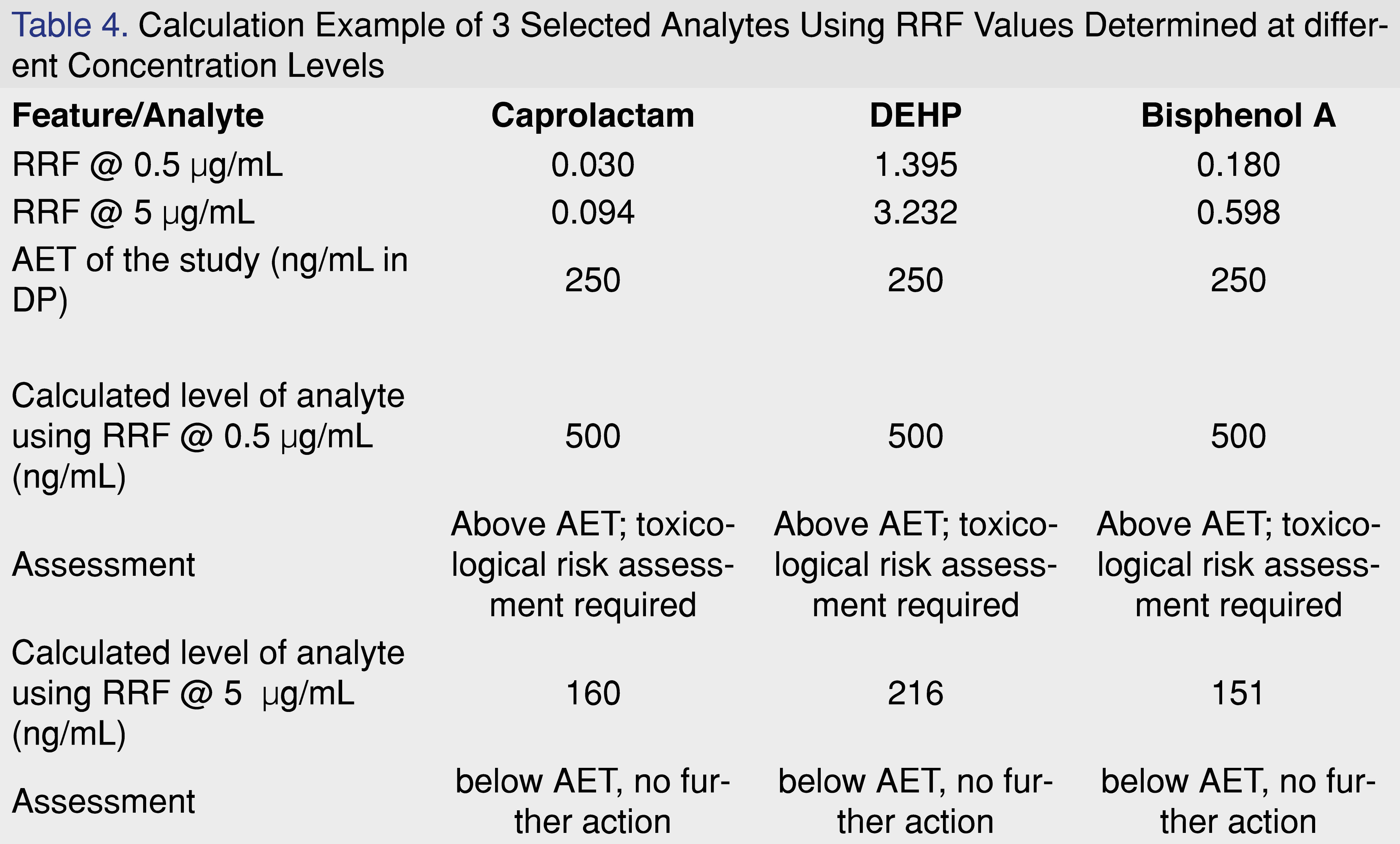 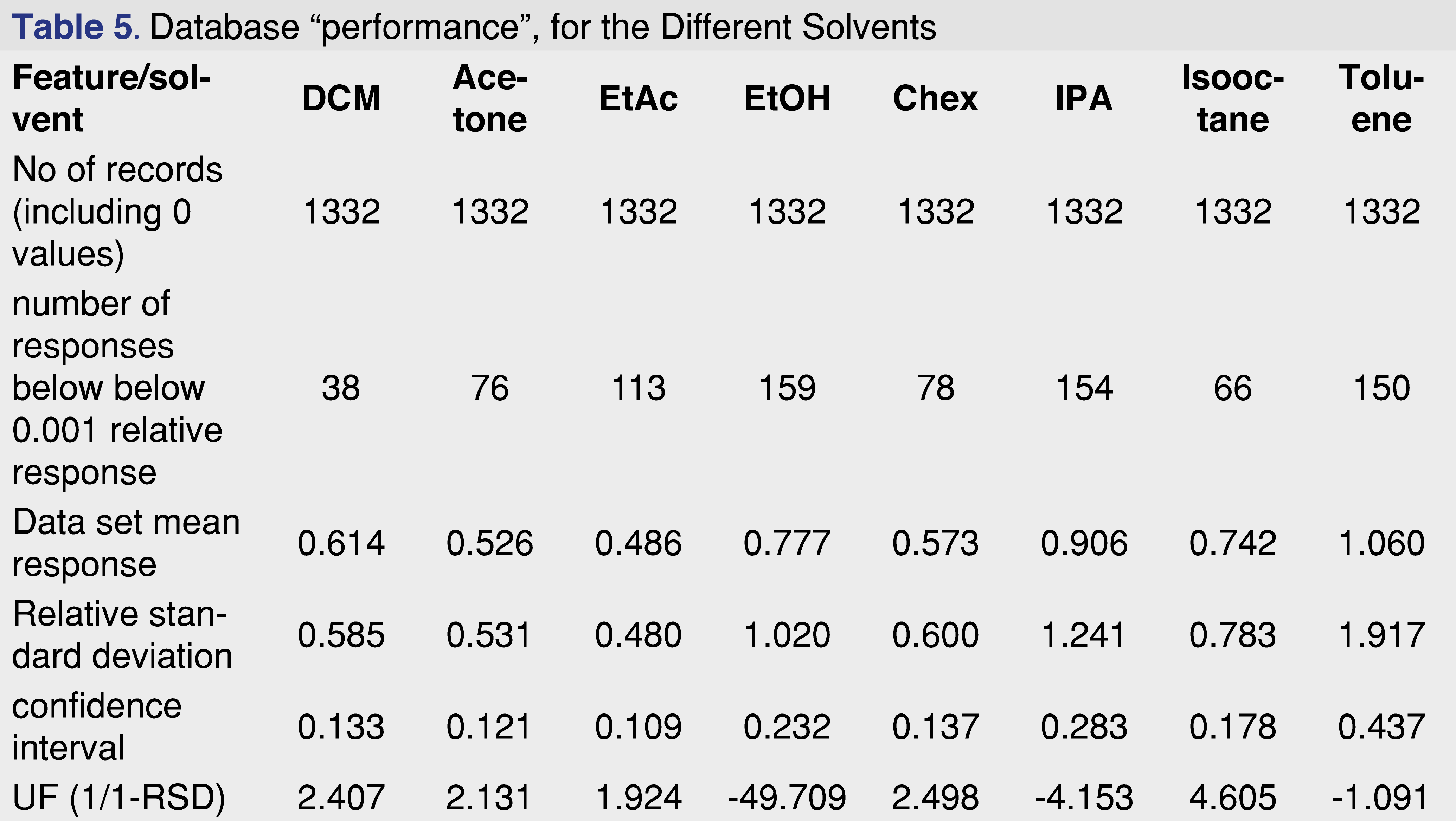 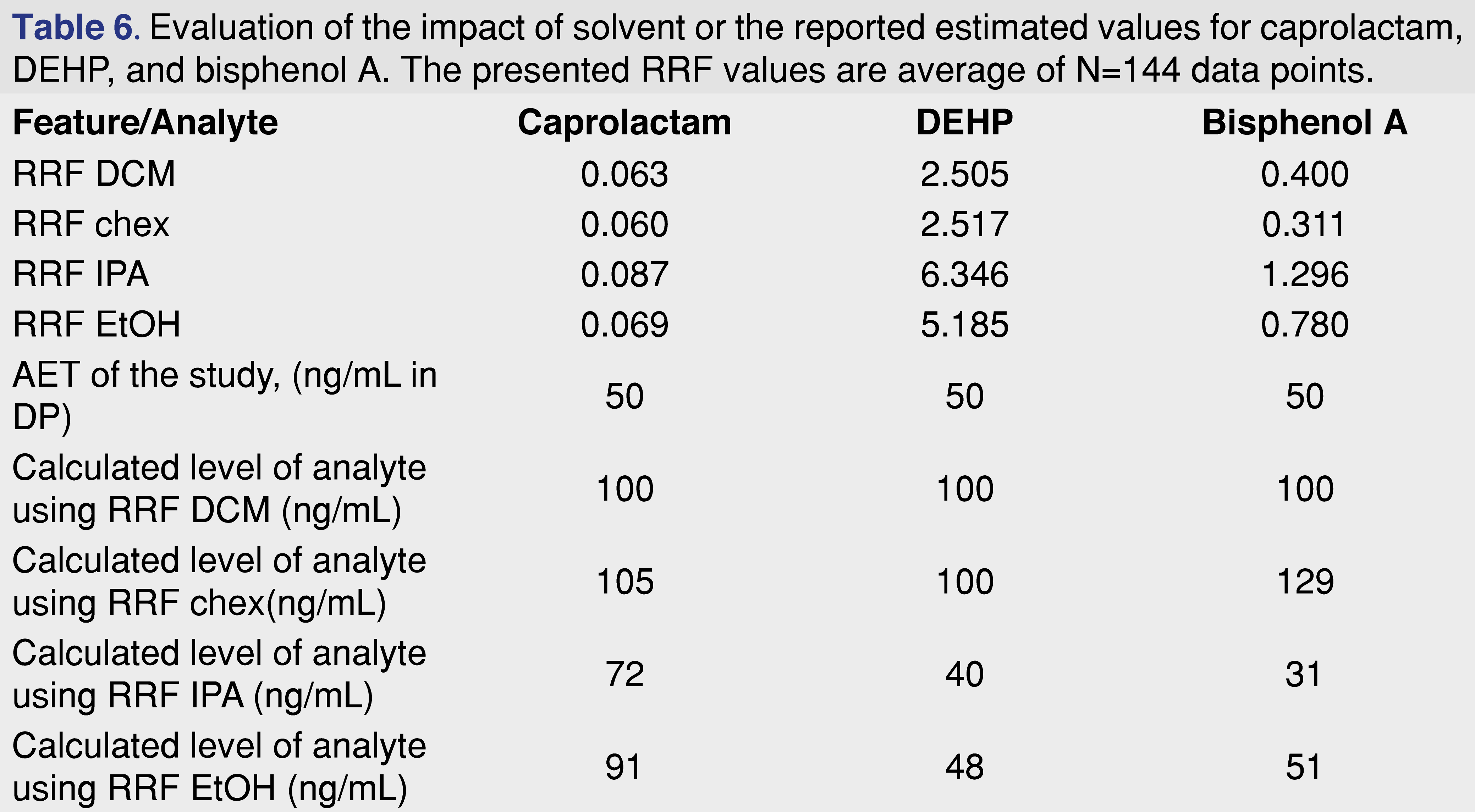 3.1. Impact of the injection vehicle for the quality of the database

Impact of the different solvent vehicles were evaluated for the relative response factors of common extractables and some model chemicals at 3 different evaluation levels. Altogether 10,656 data points were generated and evaluated (N=1332 data points for each solvent). Based on this limited data set, we can conclude that injection vehicles impact the quality of the response factor databases. As for solvents such as IPA, toluene, ethanol, and isooctane, the standard deviation of the database records is very high, therefore those databases cannot be used for AET correction. For the rest of the solvents, the UF of the databases were between 1.924-2.498, therefore it is scientifically justified if they were used for the purpose of AET level adjustment. The evaluation levels in this study were much lower than for other reported studies, therefore they can provide quantitative assignment for extracts with low-level target concentrations.
Based on the presented data we can conclude that the RRF databases need to be used with scientific justification, as the selection of the injection vehicle has an impact on the database average response value and impacts the number of low responding records and RSD of the database.