Open-access and Copyright:
©2021 Vas G. This article is an open-access article distributed under the terms of the Creative Commons Attribution License (CC-BY) which permits any use, distribution, and reproduction in any medium, provided the original author(s) and source are credited.

The current national outbreak of electronic-cigarette, or vaping, product use–associated lung injury (EVALI) have been reported and started to be investigated by CDC, so far without a conclusive outcome of the root cause. The root of the problem may be associated with multiple factors, including thermal degradation of Vitamin E acetate (VEA), which could produce degradation products with potential risk to human health.
This study is focused on generating and identifying the volatile thermal degradation products of VEA using GC-High-Resolution-MS (GC-HRAMS) system. The degradation was studied in a range of 50-280°C, which is aligned to the highest temperature settings of some of the marketed products. More than 40 volatile degradation products were found and a majority of them were identified. The study demonstrates that below a certain temperature the formation of degradation products is negligible therefore the associated health risk may be low.

Stock solutions of VEA and the IS/RS analyte were prepared in DCM as an individual solution at a concentration of 5 mg/mL level. Liquid samples of VEA standard were transferred to an ultraclean glass vial, using a calibrated positive displacement automatic pipette, and weighted in an analytical microbalance. The microbalance was calibrated according to USP <41> [33], and the minimum weight was determined as 10 mg, the calibration checked on a daily basis. Working standard solutions of the IS/RS were prepared by dilution of the stock to 10 µg/mL (parts per million) concentration. The serial dilution of the stock was performed by transferring the liquids with calibrated automatic pipettors. The stock solution of the Vitamin E acetate was used as is and the IS/RS working standard was used for spiking the thermal degradation samples

Samples for thermal degradation were prepared in a 20 mL ultra-high purity screw cap HS vial. One hundred micrograms (0.1 mg) of VEA was placed into the HS vial by transferring one 20 microliter portion and the vial was kept open for 4 hours until the DCM was completely evaporated. After the solvent was completely evaporated (no presence of DCM in the head-space), the vials were spiked with 100 ng of IS/RS using 10 microliters of the working standard solution. After the IS/RS spike, the vials were flushed for 20 seconds with high purity nitrogen to prevent unnecessary oxidation and closed with PTFE-faced silicone septa. Each and every vial prepared in that manner contains 100 µg of VEA and 100 ng of IS/RS.

Sample vials with the IS/RS and the VEA were placed in an aluminum block heater and placed into a GC oven. One set of vials were kept at room temperature were used as a control sample to evaluate the baseline levels of the volatiles. The GC oven was programmed from 50-280°C with 10°C steps and the temperature was kept for 10 minutes at each step. Samples were replaced after the end of each temperature step. Two samples were prepared at each temperature step. After the samples were removed from the GC oven they were cooled down and placed in the HS autosampler rack of the GC-HRAMS system.

The thermal degradation samples were extracted with HS-SPME. Samples were incubated at 85°C for 10 minutes and extracted with a 100 µm PDMS extraction fiber. The extracted analytes were thermally desorbed from the PDMS fiber in a hot PTV injector at 260°C using splitless injection mode. (Note that SPME injection is not influenced by solvent evaporation vs. injecting liquid to the system [34,35]).

Thermo Scientific GC-Orbitrap® High-Resolution Accurate Mass System (referenced as GC-Orbi) was used for the testing [36,37]. It is equipped with a PTV injection system [38], which was used in hot constant temperature splitless mode at 260°C with a 3 minute splitless time. For the chromatographic separation, a Restek Rxi 5 MS 30 m x 0.25 mm with 0.25 µm film thickness (β=250) with He carrier (Ultra High Purity, less than 1 ppm total impurities) at 1.2 mL/min constant flow was used. The temperature program was starting at 50°C (1-minute hold) to 300°C at 20°C/min (10-minute hold). Electron ionization at 70 eV energy with 50 µA current with an ExtractaBrite™ ion source operated at 275°C. The high-resolution system was calibrated on a daily basis and the mass error for the calibration peaks was below 0.5 ppm. The overall mass error for the observed degradation species is presented in Tables 1 and Table 2. 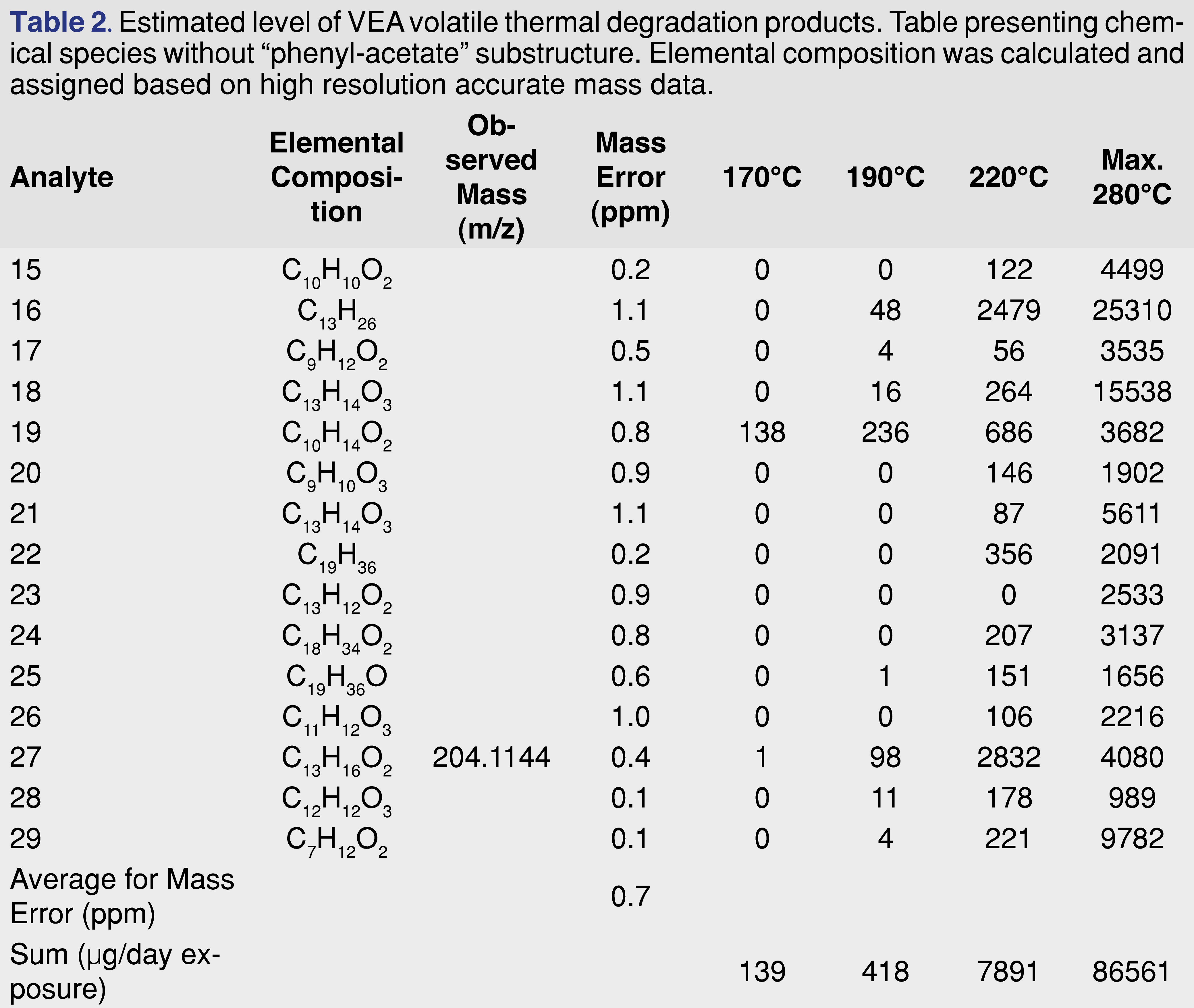 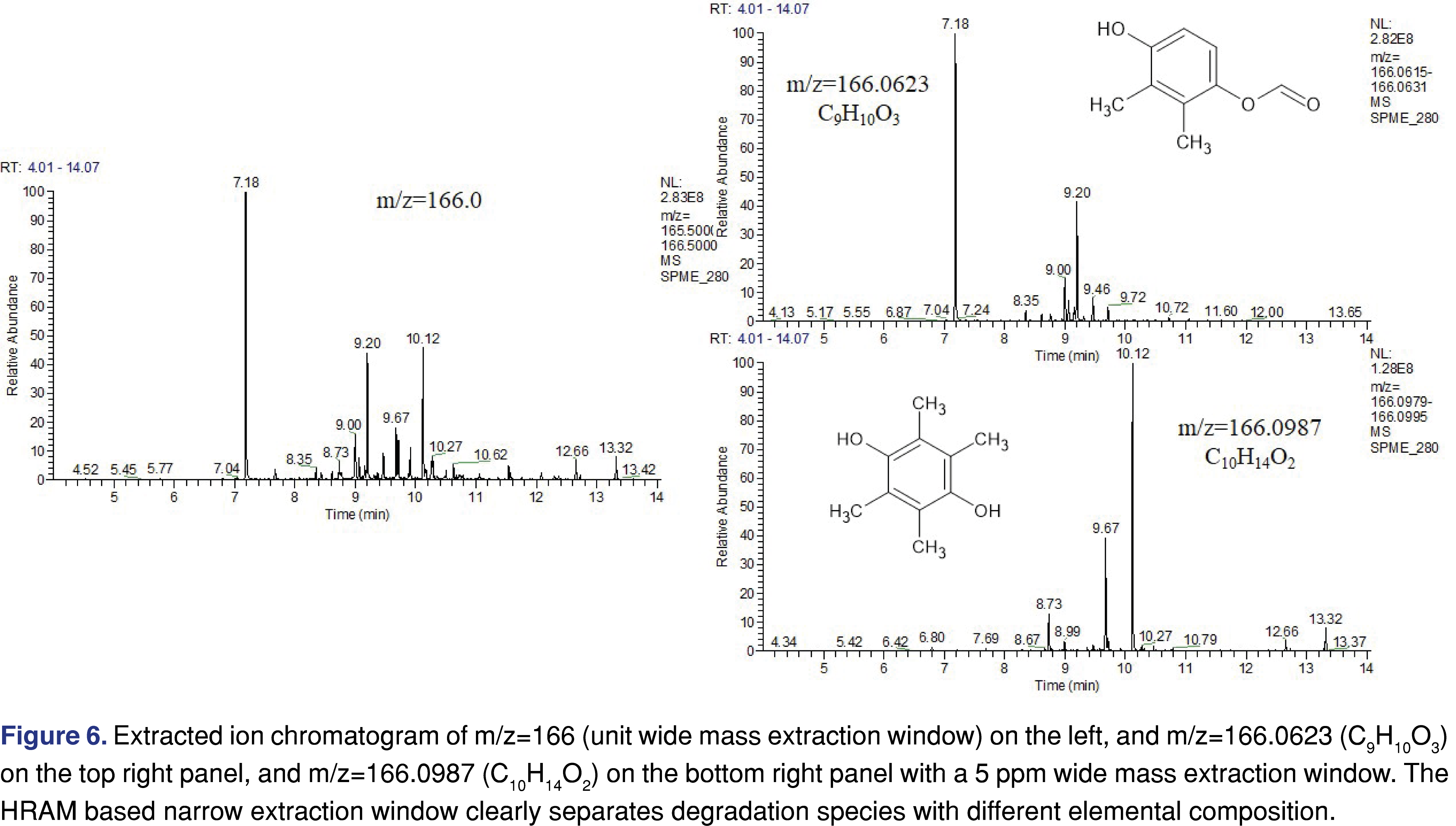 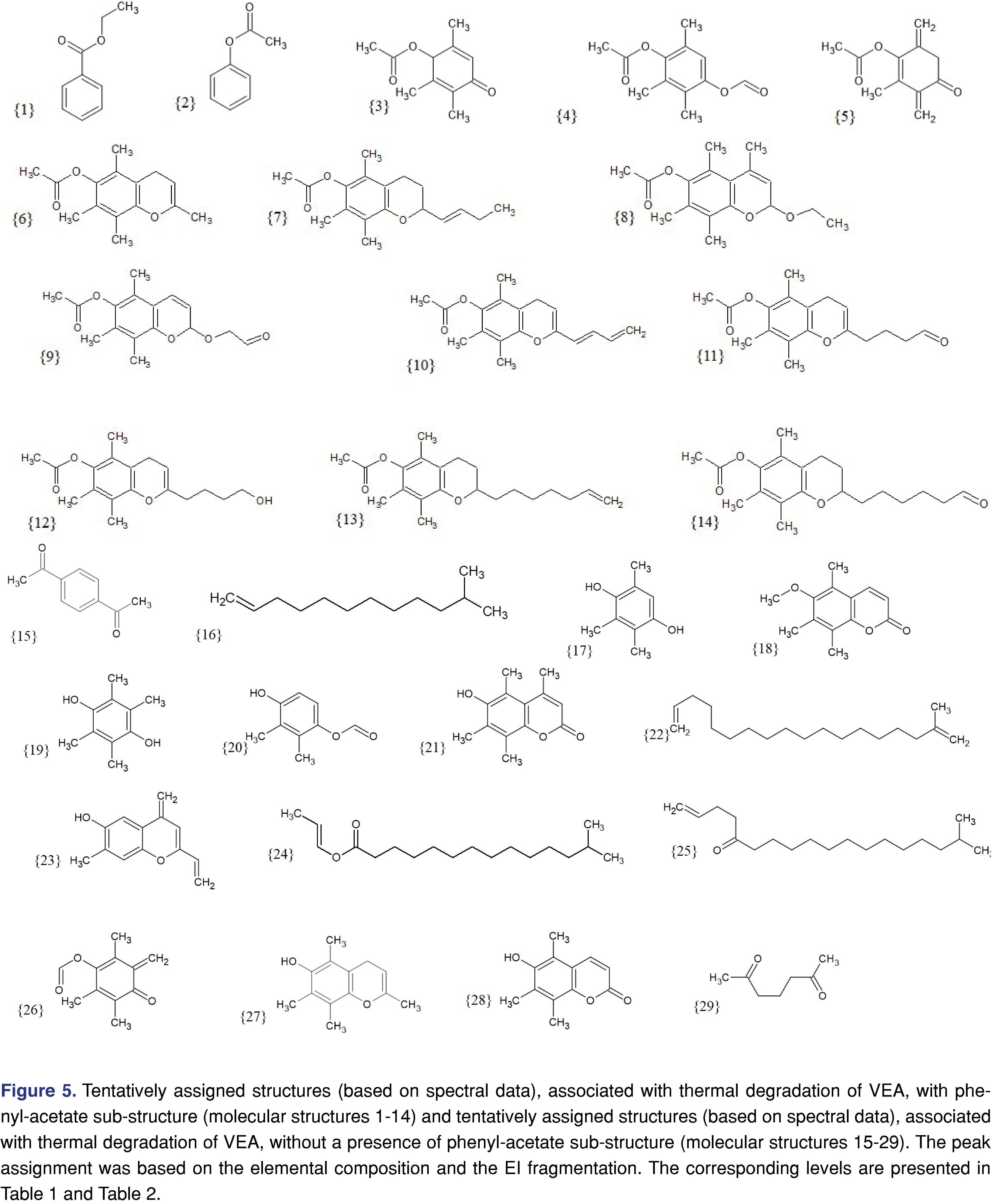 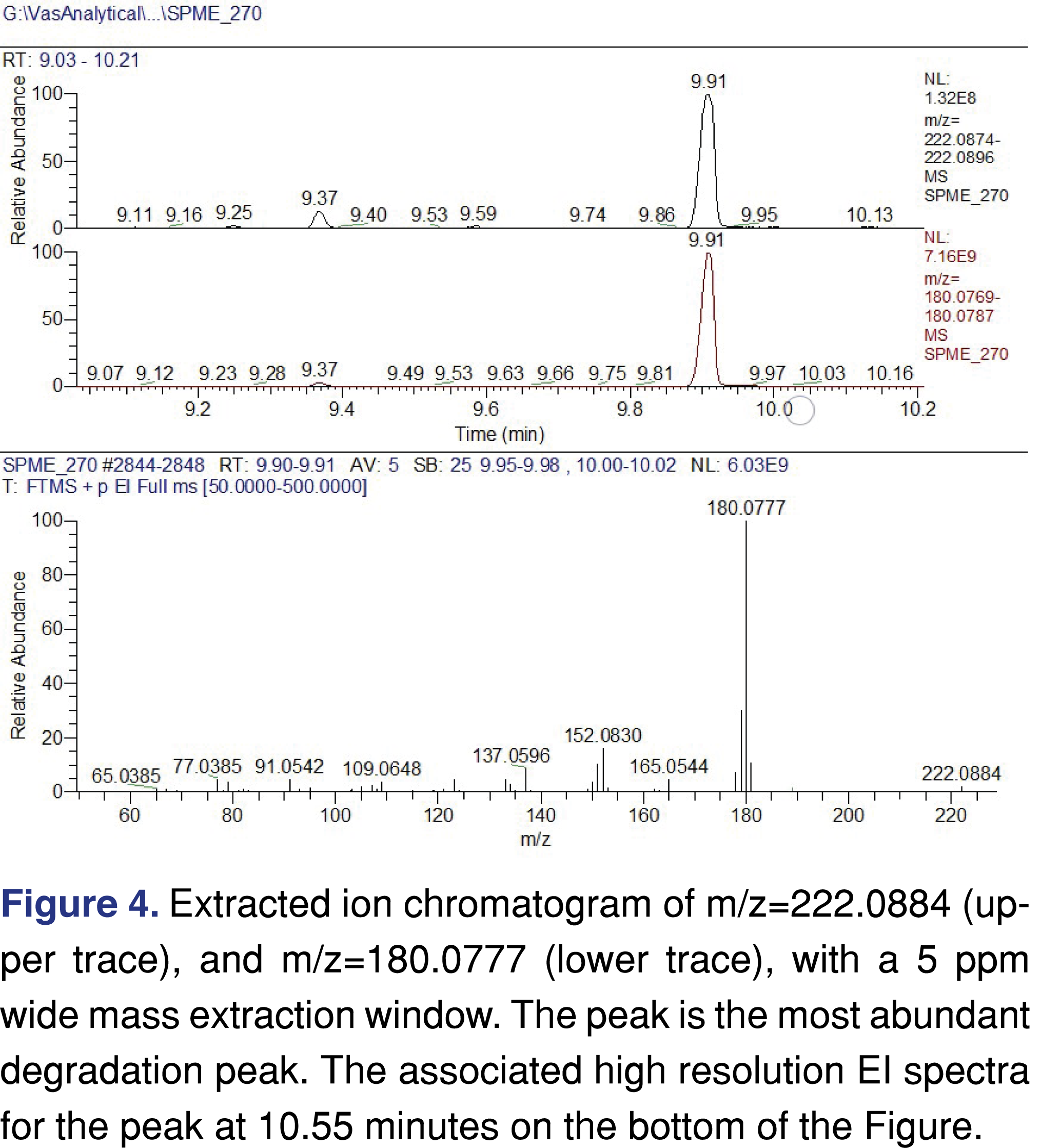 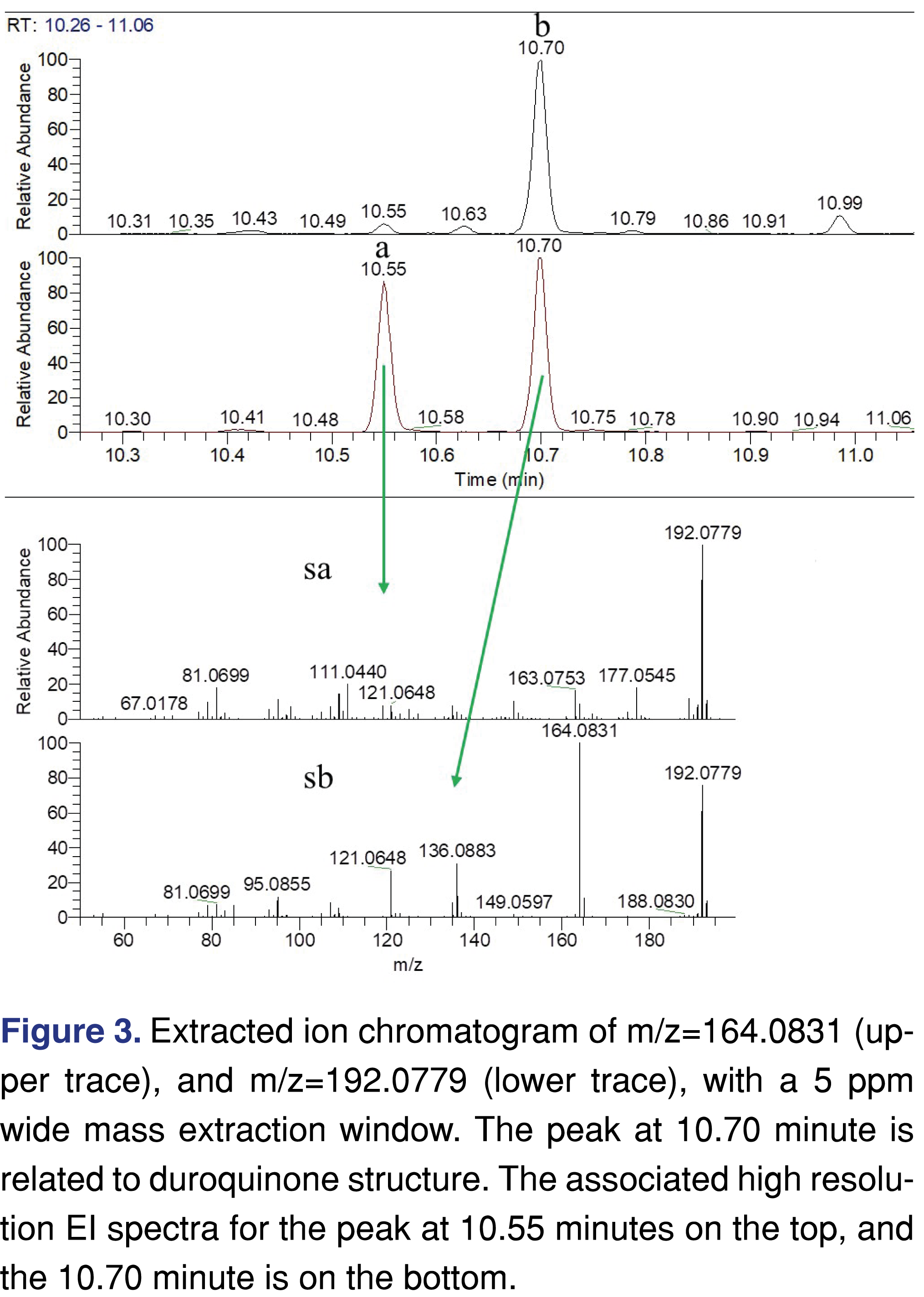 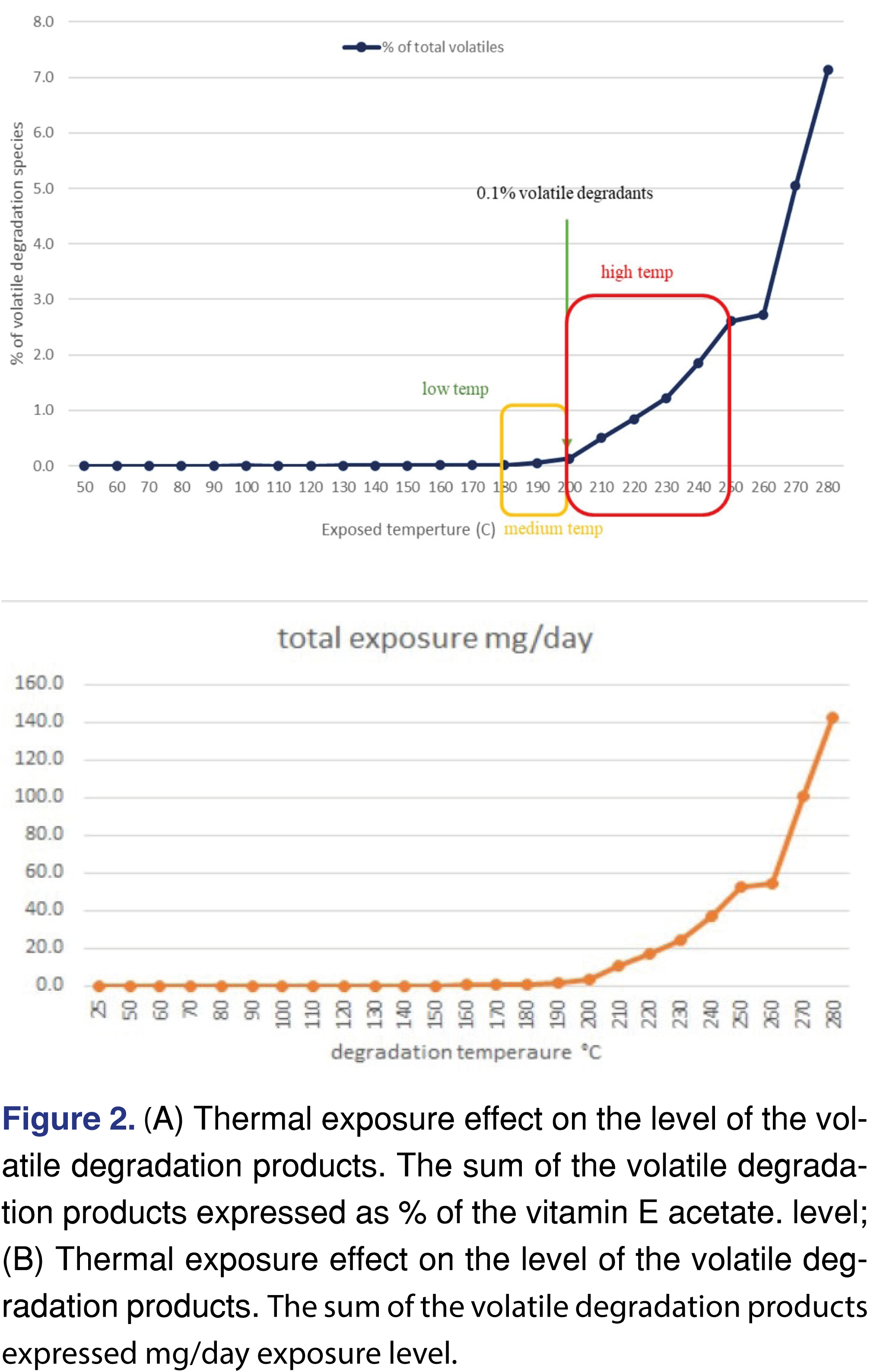 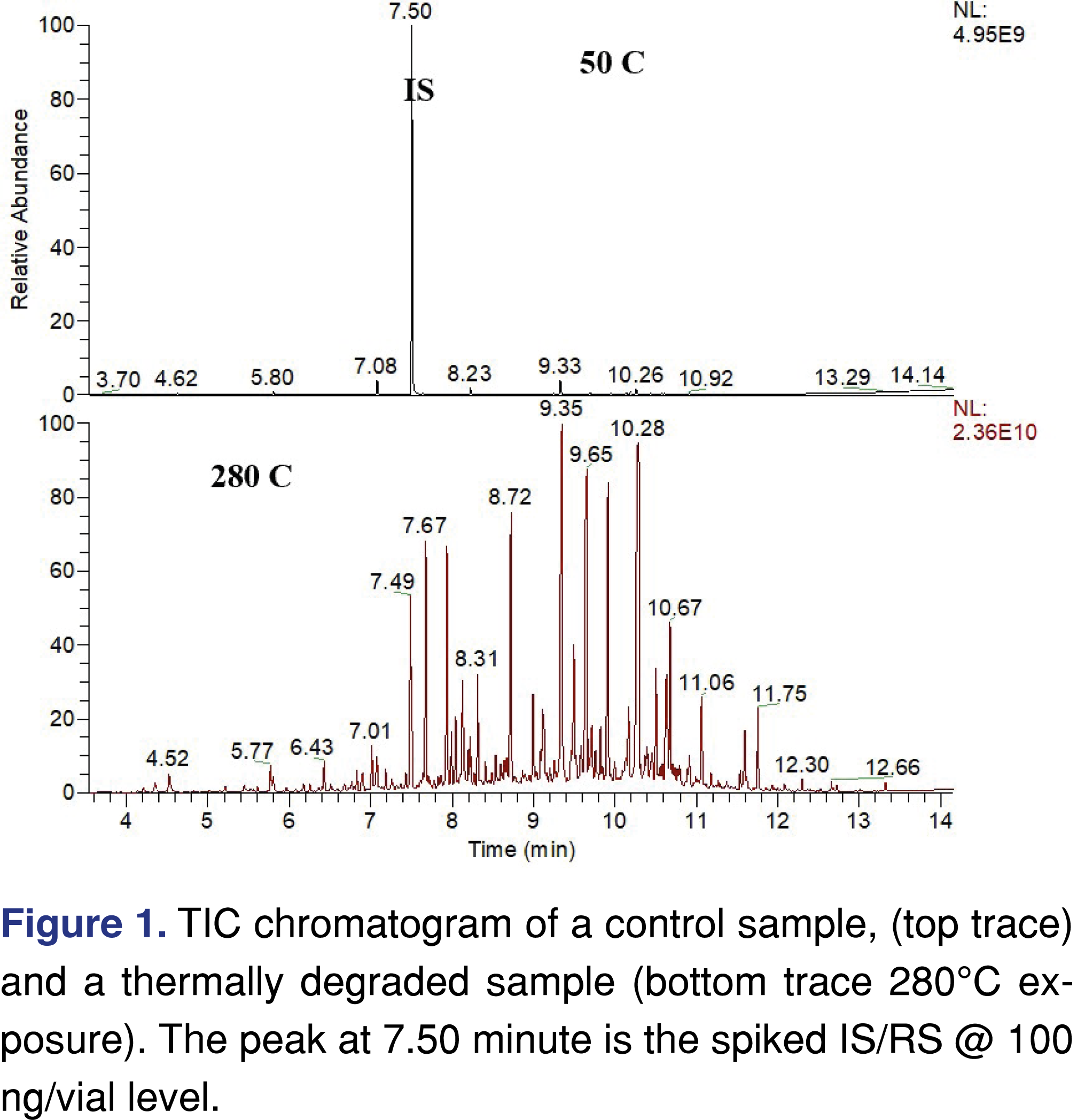 High-Resolution Accurate Mass (HRAM) based detection hyphenated with gas-chromatography has been used for decades in the analytical laboratories, However, in the past were only sector-type instruments available. Those instruments were required significant laboratory space and significant capital investment compared to the benchtop systems. Therefore, they were not a very popular choice for the laboratories. The landscape has been changed when a benchtop Q-Tof or Orbitrap-based instrumentations were commercially introduced in the early 2000’s. The major advantage of an HRAM based detection is the accurate mass-based elemental composition of the spectral peak and the reduced level of background (spectral) noise.
The data in Tables 1 and Table 2 shows multiple degradation species with the same nominal mass (m/z=192 for 5 and 26; m/z=290 for 8 and 9; m/z=166 for 19 and 20, and m/z=204 for 27 and 28 pairs), however, the accurate mass results are different for the last 3 sets and their elemental composition is different. For example, the m/z=166.0987 is associated with the elemental composition of C10H14O2, while the m/z=166.0623 is associated with C9H10O3. The scenario for the difference between the extracted ion chromatograms of unit resolution and the high resolution was presented in Figure 6.
The chromatograms of Figure 6 show significant differences when a unit resolution mass extraction window is being used. Approximately 15 peaks can be observed in the chromatogram. Since they are associated with the same nominal mass, it is believed they are related to each other. However, when a 5 ppm wide mass extraction window is being used, the species with the same elemental composition were shown in one chromatogram and became clear that species are related to each other within the same elemental group. It helps to differentiate different chemical species in addition to the fragmentation pattern.

3.2. Impact of the Sample Preparation for the Identification Process

Sample preparation is playing an important role in the analysis of complex mixtures [54]. Reliable and optimized sample preparation may:
reduce interferences from the sample matrix
enhance the concentration of the analyte(s) of interest
• reduce the cost of the analysis
• reduce the overall time of the sample analysis
Headspace-based SPME sample preparation was used as sample preparation and sample introduction for GC-MS, since the focus of the study was to evaluate the volatile degradation species, assuming they will reach the lung and may be connected to the EVALI epidemic. SPME seemed a reasonable fit for purpose as only the most volatile and semi-volatile species reach the fiber during the sampling and the heavy matrix of non-volatiles are not reaching the fiber and therefore they are not extracted. The sampling technique is also known for concentrating the analyte in the head-space. Thus, it enhances a chance for higher amounts of analytes introduced to the GC-MS, which increases the quality of the spectral data. The SPME sample preparation was compared to the direct injection of a degradation sample is presented in Figure 7. The thermal degradation sample was dissolved in dichloromethane and was injected directly into the GC-MS system. With SPME extraction, approximately 50 ng of a selected analyte was introduced to the system and detected and with direct liquid injection, only 0.4 ng of the same analyte was introduced and detected. The major reason for this considerable difference is that SPME concentrates the analytes, in contrast when the thermally degraded sample dissolved in a solvent it is diluted and only a small portion of the diluted material is injected and reaches the column. The result of the lower amount of analyte shows a significant difference in the spectral quality. The EI spectra on the left show negligible effect of the column bleed associated peaks, however, when the amount of the analyte is low, the background peaks become significant, reducing the spectral quality. As the spectral quality lowers with the direct liquid introduction, the identification becomes difficult, as the analyst needs to spend time and effort to assign which peak is related to the target analyte and which peak is related to the background.

High-Resolution GC-MS combined with SPME sample preparation was used to evaluate and identify VEA thermal degradation products. The performed thermal degradation experiment resulted in over a hundred volatile degradation species. Although the maximum degradation temperature was lower than the pyrolysis temperature, which is usually associated with the electronic vaping devices, the formation of potential ketene precursor species previously reported [2], were also observed in our study. Based on the acquired data, the vitamin E acetate thermal degradation species are more polar and associated with lower logP than the original molecule, and likely to have better absorption to the alveolus lining fluid. The solventless sample preparation technique showed some benefit over the traditional “dissolve and shoot” approach, resulting in higher quality spectra data for identification and quantitation purposes. The toxicity of the identified species has not been evaluated, however, the presented data in this paper can support further toxicological risk assessment, related to vaping products, that are containing VEA .

The author would like to express his gratitude to Intertek Pharmaceutical Services for the opportunity to have access to a high-resolution accurate mass GC-MS system.