A simple and fast CE method developed on the new modular Wyn-CE system coupled with a sensitive contactless conductivity detection was described for the analysis of potassium, sodium, calcium, and magnesium cations in Total Parenteral Nutrition (TPN) formulations. The used background electrolyte is a mixture of 50 mM acetic acid and 12 mM L-Histidine, pH 4.1. With this electrolyte, the separation of the targeted cations was achieved in 2 min. Obtained limits of detection were comprised between 1 and 1.5 µM. The developed method was then validated and trueness values between 98.5% and 102.3% were obtained with repeatability values of 0.9-1.3%. This validated method was finally successfully applied to TPN quality control.

The compounding of Total Parenteral Nutrition (TPN) formulations in hospital pharmacies needs a high quality analytical control due to the risk incurred by the patient [1]. Errors in the electrolyte concentrations can lead to important damages on health patient, especially for babies, in neonatology services. For babies and children, some hospitals used commercial TPN but others preferred Individual Parenteral Nutrition directly prepared in pharmaceutical laboratory manually or with an automated compounding device. An important control of the formulation qualities is today mandatory before the administration to the patient in order to eliminate conception errors which can have serious clinical consequences.
Capillary electrophoresis coupled with indirect UV detection was already developed for the analysis of cations in TPN [2] and appeared as a valuable alternative to flame spectrometry or IC. Indirect UV detection for routine analysis can be difficult to implement due to the obligation to create a detection window on the capillary and the use of complex buffers containing most often carcinogen and mutagen chromophore agents. The apparition of contactless conductivity detectors offered to users an easy handling of capillary and a simpler buffer conception. Nussbaumer et al. already presented a CE method dedicated to the problematic of cation in TPN analyses [3]. This method used a hydro-organic Background Electrolyte (BGE) composed by 100 mM Tris/acetate buffer at pH 4.5 and acetonitrile (80/20, v/v). The separation was obtained in 4 min with limits of detection was estimated at 0.02 mM for all cations.
This application note focused on the validation of a faster and more sensitive CE method with C4D detection for the analysis of sodium, potassium, magnesium, and calcium cations in TPN with for the first time a new CE equipment, Wyn-CE from WynSep, well adapted to quality control.

Tested parenteral nutrition solutions were prepared at the pharmacy of the Purpan Hospital (Toulouse, France).

The CE experiments were carried out with a modular WynSep Wyn-CE system (Labège-Innopôle, France) equipped with a manual carousel, a touchscreen interface and a power supply able to deliver up to 30 kV. With the touchscreen interface, the apparatus handling is done in five minutes and an analysis is easily launched. The detection was carried out with a C4D detector set at Frequency, 500 kHz, Amplitude, 100 %, Range 0.05 V and Headstage Gain set at ON. The HeadStage module was easily implemented in the Wyn-CE cassette which is maintained at constant temperature with a Peltier module. The Data acquisition was performed using Clarity CE software (DataApex, Prague, Czech Republic). CE results were compared with quantitative analyses of Na+ and K+ concentrations obtained with a flame photometer instrumentation laboratory routinely used in the Hospital Pharmacy.

Electrophoretic separations were performed using 50 µm I.D. x 65 cm bare fused-silica Polymicro capillaries purchased from Photonlines (Marly-Le-Roi, France). C4D Headstage was positioned at 40 cm from the anodic end. Before first use, capillaries were conditioned by successive flushing with 0.1 M NaOH and ultra-pure water each under 890 mbar for 10 min, then BGE under 890 mbar for 45 min. Between each run, BGE was percolated under 850 mbar for 3 min. Injections were performed hydrodynamically under 50 mbar for 7 s (1.1 % of the capillary volume). Separations were run at 25 °C under +30 kV. BGE was changed every 6 runs.

The validation of the developed method was carried out to prove the method could be applied routinely to the quantitative analysis of cations in total parenteral nutrition formulations with a quantitation limit of 5 µM. Most often, for pharmaceutical laboratories, precision and accuracy of the method had to be better than 5 % and 15 %, respectively.

Calibration was carried out with five repeated injections for five different cation concentrations (5, 10, 20, 50, and 100 µM, (or 200 µM for potassium) in ultra-pure water. Solutions were stored at 4 °C until use. No degradation of sample was observed during analyses.

Preparation of the validation standard

The targeted cations were determined in TPN formulation prepared at the pharmacy (named TPN 4315 and TPN 4316). Before analyses, TPN formulations were diluted 1000 times to obtain a final cation concentration in the validated linearity range.

Description of the CE method

For the analysis of cations in CE coupled with a C4D detection, a BGE with medium conductivity (κ = 770 µS/cm) composed of 12 mM Histidine/50 mM acetic acid (pH 4.1) was used [4]. This BGE was found to provide good peak shapes with fast separations. The medium conductivity allowed the application of the maximum separation voltage (+30 kV) without Joule effect. The resulting electropherogram is shown in Figure 1. The obtained separation exhibited a good separation of the 4 analytes with a resolution superior to 1.2 and an analysis time divided by 2 compared to those obtained by Nussbaumer et al. [3]. This gain can be important if the number of TPN to analyze is important.
The C4D parameters were also optimized with different frequencies and amplitudes tested. A frequency of 500 kHz and an amplitudes fixed at 100 % gave best results. In order to detect compounds Headstage Gain need to be activate and the range had to be set at 0.05 V.

The validation of the previously optimized method, enabling the separation of a standard mixture of 4 cations in 2 min with a 50 mM glacial acetic acid and 12 mM L-Histidine-based BGE, was carried out to evaluate its potential for routine determination of cations in parenteral nutrition solutions. Lithium cation was used as internal standard at a concentration set at 20 µM.

Cationic species composing Ternary Total Parenteral Nutrition Formulations are in most of all cases sodium, potassium, calcium, and magnesium cations. Thus, no interfering cationic compound was present in the formulation. In order to verify this aspect, an analysis of blank matrix (matrix without cationic species) was carried out and no peak was detected in the cation migration time range. This lends support to considering that the selectivity of the CE method was satisfactory.

For a signal-to-noise ratio of 3, LODs were estimated at 1 µM for potassium cation and 1.5 µM for other cations (Table 1).

For a signal-to-noise ratio of 9 (3 x LODs), the LOQs were experimentally checked at 5 µM for all cations. These LOQs were checked with five different solutions of cations at their LOQ concentrations injected twice. At these concentration levels, the maximum bias obtained for cations did not exceed 6 %, which meets the requirement of main pharmaceutical labs.

The linearity of the method was evaluated by plotting the normalized corrected areas for each cations against the injected concentrations. Linear regressions were performed and coefficients of determination R² are given in Table 1. The linearity range has for lower limit the limits of quantitation and for upper limit, the concentration for which a bias superior to 10 % was observed. Thus for potassium the linearity range spanned from 5 or 200 µM, and for all cations from 5 to 100 µM. R² equal or up to 0.996 were obtained for all cations, in these considered ranges.

Blank matrices (without cationic species) were spiked with targeted cations at known concentrations. After analyses, the concentrations obtained for S1 and S2 were computed from the analytical response to obtain trueness and repeatability. Trueness was expressed in percent as the ratio between the theoretical concentration value and the average measured value. As shown in Table 2, the trueness is in accordance with standard recommendations applied to the pharmaceutical lab. The RSD values for repeatability was lower than 1.5 % with trueness between 98.5 and 102.3 %. With these results, the CE method is validated for determining cations in total parenteral nutrition formulations in the tested concentration ranges. 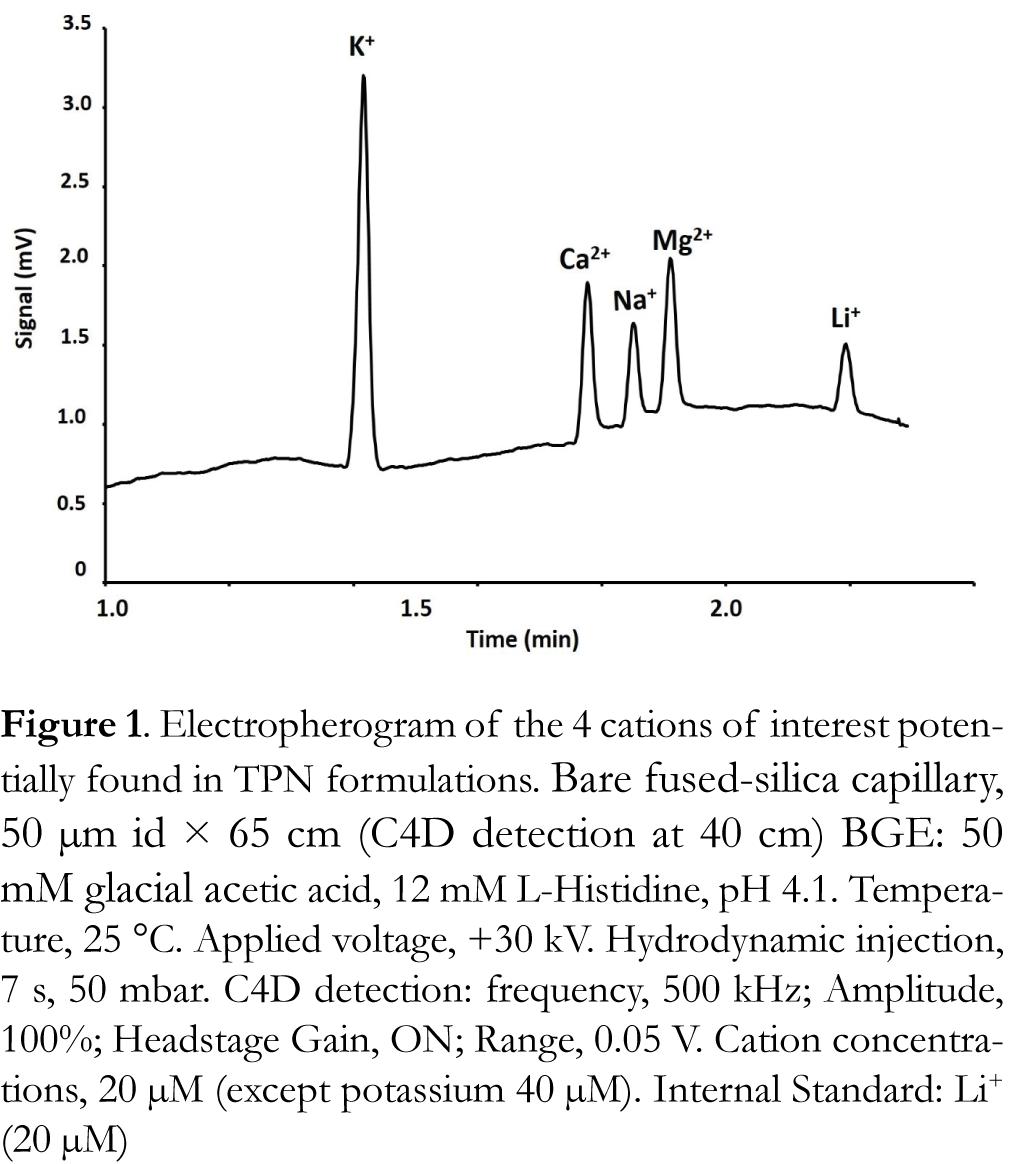 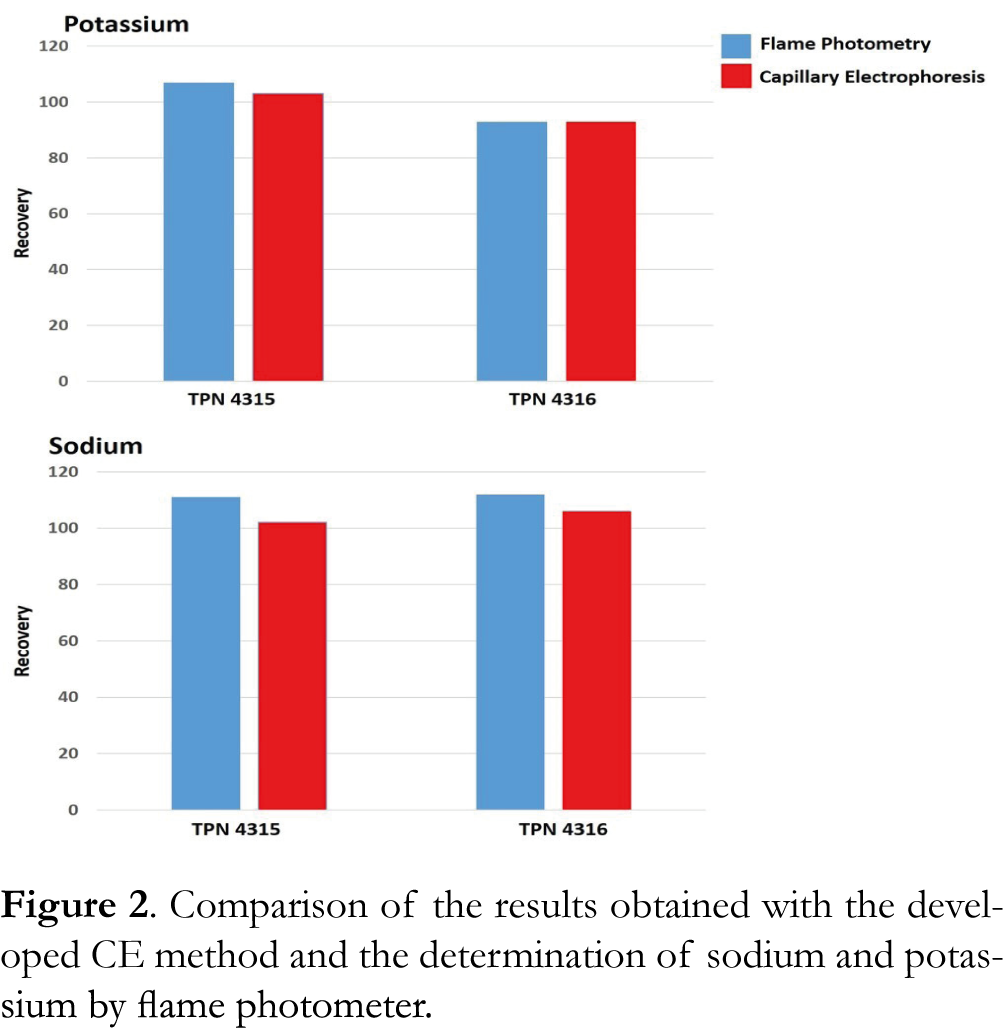 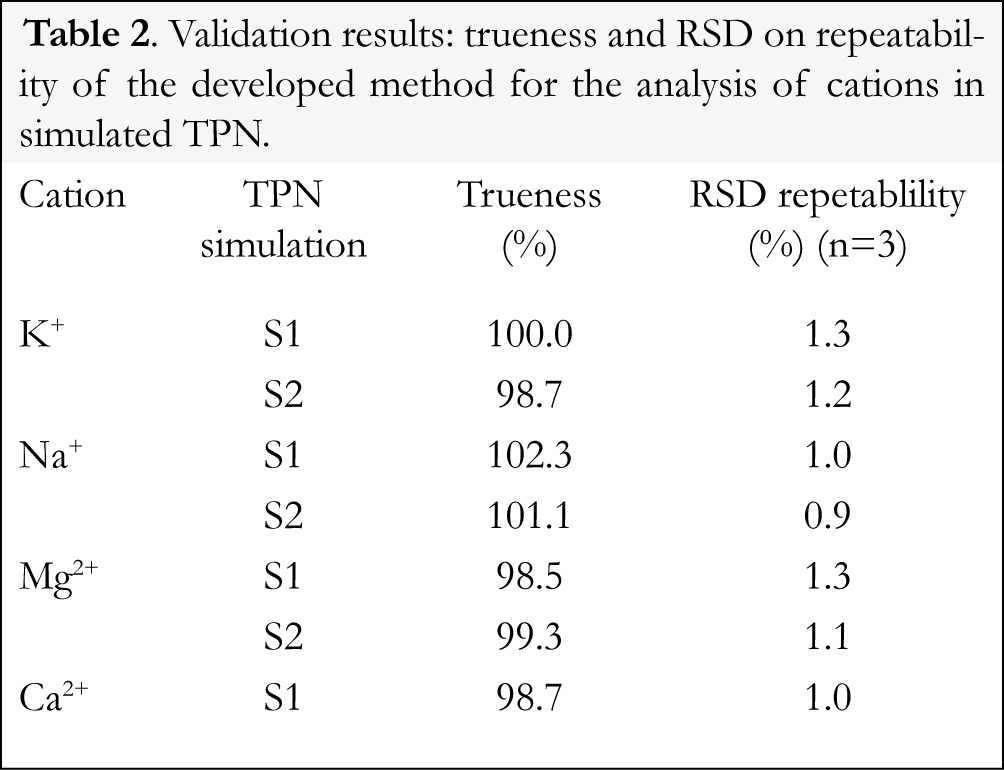 In order to demonstrate the potential of the developed CE method for the analysis of real TPN in hospital pharmacies (named TPN 4315 and TPN 4316), quantitation of the four cations was achieved on two real formulations prepared by the pharmacy of the Toulouse Hospital. The obtained results were compared to those obtained with a flame photometer, classically used as a reference method for only sodium and potassium cations. Recovery was expressed in percent as the ratio between the concentration value in the TPN indicated by the automated compounding system and the average measured value. Results are presented in Figure 2. The two methods offered comparable results for the analysis of the cations in TPN 4315 and 4316. Thus CE method can also described as a valuable alternative method for the determination of cations in TPN.

A fast and sensitive CE method using a contactless conductivity detection was presented for the analysis of sodium, potassium, calcium, and magnesium cations in ternary total parenteral nutrition formulations. The developed method exhibited good quantitative performances in term of LOD, repeatability and trueness. Wyn-CE System with C4D detection appeared as a powerful technique for the determination of cations in TPN.