Open-access and Copyright:
©2016 Durisova M. This article is an open access article distributed under the terms of the Creative Commons Attribution License (CC-BY) which permits any use, distribution, and reproduction in any medium, provided the original author(s) and source are credited.

Funding/Manuscript writing assistance:
This work was financial supported by the Slovak Academy of Sciences in Bratislava, Slovak Republic. The author declares that no writing assistance was utilized in the production of this article.

The antibiotic drug ampicillin was developed in 1961 [1,2]. It is commonly used to treat respiratory tract infections, urinary tract infections, meningitis, salmonella infections, and endocarditis. Besides that, ampicillin has been used also to prevent group B streptococcal infection in newborns, and also as an anticancer drug [1-3]. During the last decades, the research domain of systems engineering emerged as a domain of fundamental importance with a great impact on several fields of sciences, including the field of pharmacokinetics, see for example the following studies [4-21] and references therein. Previous examples showing an advantageous use of the modeling method used in this study can be found in the full text articles available online, which can be downloaded, free of charge from the following web page of the author: http://www.uef.sav.sk/advanced.htm. Ampicillin is administered mostly by mouth. Besides that, ampicillin is also administered by injection into a muscle, and/or intravenously. Common side effects of ampicillin include rash, nausea, and diarrhea. The objective of this study was to perform a computational analysis of the pharmacokinetic behavior of ampicillin in patient no.1, using the data from the study published previously [2]. 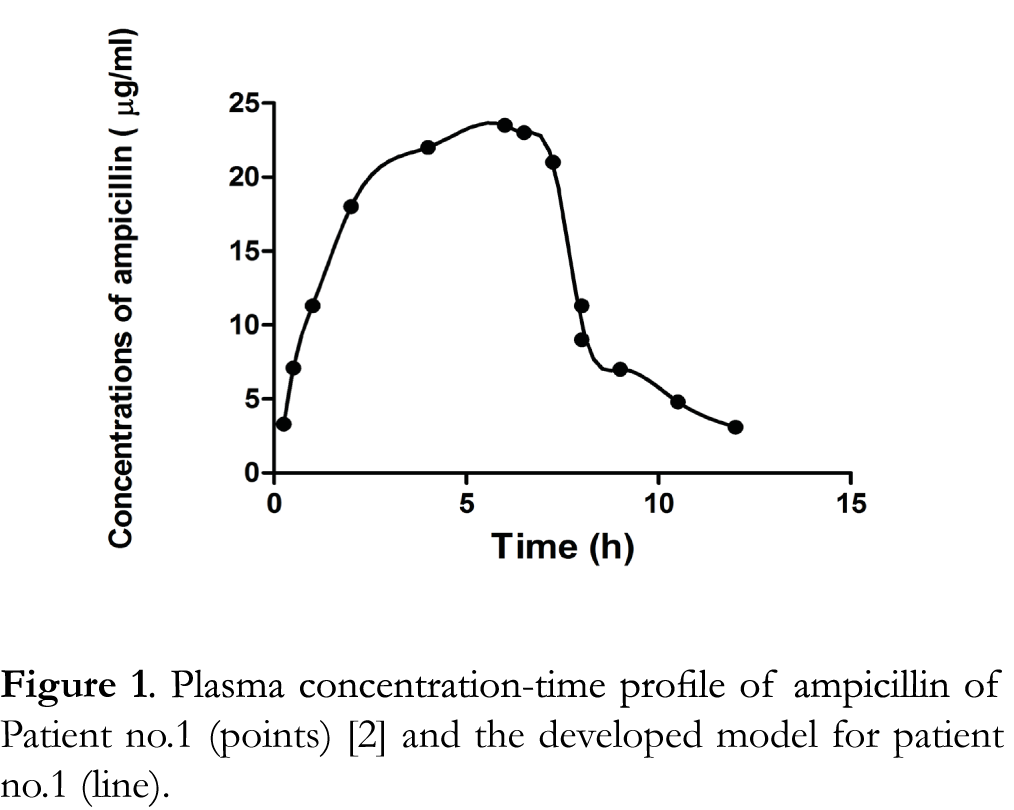 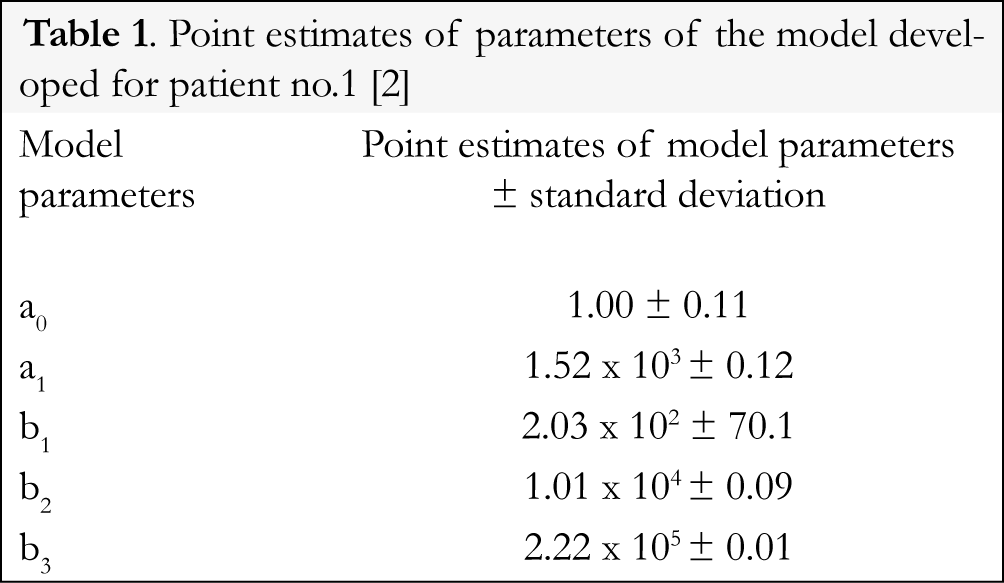 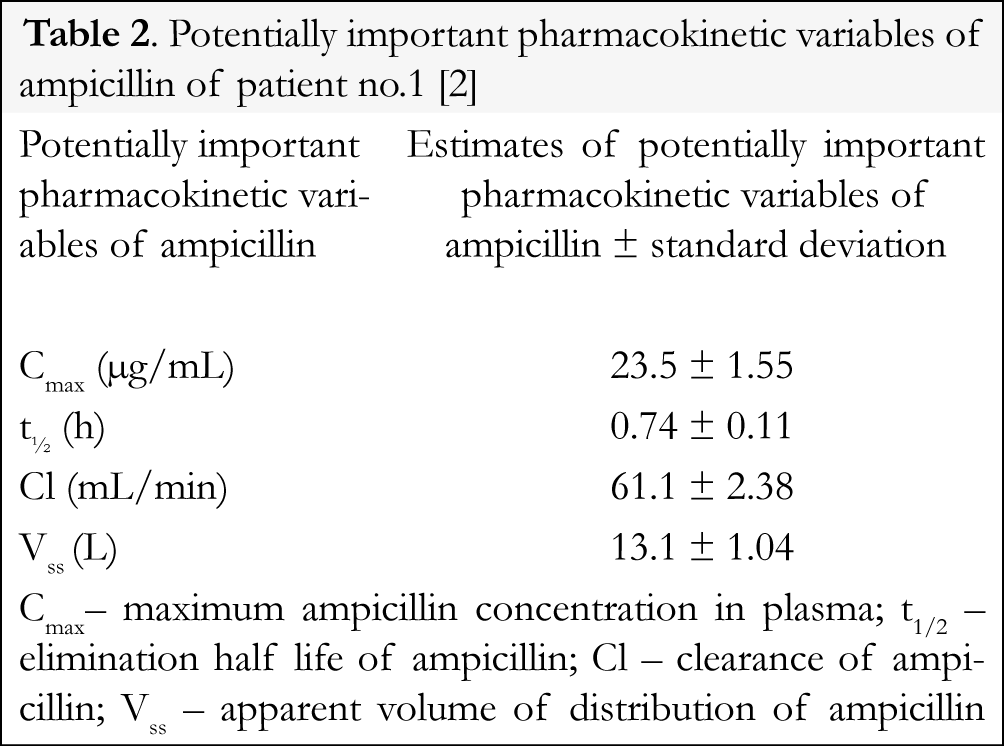 The data of patient no.1 from the study by Colburn [2] were arbitrarily chosen for this study. The best-fit third-order model FM(iωj) selected using the Akaike’s information criterion [28] is described by the following equation:

As shown in  Figure 1, the model developed provided an adequate fit to the observed serum concentration-time profile of ampicillin of patient no.1 [2]. Point estimates of the parameters a0, a1, b1, b2, b3 of the best model FM(iωj) are listed in Table 1. Model-based estimates of potentially important pharmacokinetic variables of ampicillin are listed in Table 2.
The dynamic system used in this study was a mathematical object, without any physiological significance. It was used to mathematically approximate static and dynamic properties of the pharmacokinetic behavior of ampicillin [23-25] in patient no.1 [2]. The modeling method used in this study was described in detailed in the studies published previously, authored and/or co authored by the author of this study [4,6-20]. As in previous studies, the development of a mathematical model of the pharmacokinetic dynamic system defined was based on the known input and output of the dynamic system defined was used in this study. In general, if a dynamic system is modeled using a transfer function model, as it was the case in the this study (see Eq. (2)), then the accuracy of the model depends on the degrees of the polynomials of the transfer function model used to fit the data [4,6-20].
The model parameter called the gain is also called gain coefficient, or gain factor. A parameter gain is defined as a relationship between a magnitude of an output of a dynamic system to a magnitude of an input to a dynamic system in steady state [6-20]. Or in other words, a model parameter gain of a dynamic system is a proportional value that shows a relationship between a magnitude of an output to a magnitude of an input of a dynamic system in the steady state. The pharmacokinetic meaning of a parameter gain depends on the nature of a dynamic system under study.
The non-iterative method published in the study [26] and used in this study allows one to identify an optimal structure of frequency response models very quickly. It is a great advantage of the non-iterative method [26], because this significantly speeds up the development of frequency response models. The reason for conversion of HM(s) to FM(iωj) can be explained as follows: the variable: “s ” in the transfer function model HM(s) in Eq. (1) and Eq. (2) is a complex Laplace variable, while the angular frequency “ω” in Eq. (3) and Eq. (4) is a real variable, what is suitable for modeling purposes.
The mathematical model developed in this study sufficiently approximated static and dynamic properties [23-25] of the pharmacokinetic behavior of ampicillin in patient no.1 [2]. Therefore, the mathematical model developed, successfully described the serum concentration-time profile of ampicilin of patient no.1 [2]. Modeling pharmacokinetic behavior of ampicilin was performed in this study only with the aim to present the further example of the successful use of the modeling method [4] in pharmacokinetics, without any relation to the therapeutic use of ampicillin. Frequency response functions are complex functions, therefore modeling must be performed in the complex domain. Moreover, modeling methods used to develop model frequency response functions are computationally intensive, and for accurate modeling they require at least a partial knowledge of the theory of dynamic system, and an abstract way of thinking about dynamic systems under study.
The principal difference between traditional pharmacokinetic modeling methods and modeling methods that are based on the theory of dynamic systems can be explained as follows: the former methods are based on mathematical modeling plasma (or blood) concentration-time profiles of drugs administered, however the latter methods are based on mathematical modeling dynamic relationships between a mathematically described drug administration and a mathematically described resulting plasma (or blood) concentration-time profile of a drug administered.
Modeling methods based on the theory of dynamic system exhibit the following advantages when compared with compartment modeling method [29-39];
1) key requirements of compartment modeling methods are not necessary;
2) specific model structures (in general unknown) are not necessary;
3) abstract assumptions of homogenous instantaneously well mixed compartments are also not necessary. On the other hand, modeling methods based on the theory of dynamic system exhibit few apparent disadvantages: the development of mathematical models is not a simple task; the use of the modelling methods considered here requires at least partial knowledge of the theory of dynamic systems and mathematics.
The transfer function model HM(s) and the model of the frequency response function FM(iωj) have been implemented in the computer program CTDB [4]. A demo version of the computer program CTDB is available at: http://www.uef.sav.sk/advanced.htm.

The modelling method used in this study is universal; therefore it can be used to model any linear dynamic system, not only in the field of pharmacokinetics but also in many other scientific or practical fields. This study repeatedly showed that a modelling method based on the theory of dynamic systems can be advantageously used in pharmacokinetics. As it follows from this study, the integration of key pharmacokinetic concepts and bioengineering concepts bioengineering is a good and efficient way to study dynamic processes in pharmacokinetics, because such integration combines mathematical rigor with biological insight

The author gratefully acknowledges the financial support obtained from the Slovak Academy of Sciences in Bratislava, Slovak Republic.