Open-access and Copyright:
©2017 Postma-Kunnen et al. This article is an open access article distributed under the terms of the Creative Commons Attribution License (CC-BY) which permits any use, distribution, and reproduction in any medium, provided the original author(s) and source are credited.

Metoprolol, a lipophilic cardioselective β1-adrenoreceptor antagonist, is widely used in the treatment of hypertension, angina pectoris and other cardiovascular diseases. For oral administration it is available as immediate release (metoprolol tartrate) or controlled release tablet (metoprolol tartrate, metoprolol succinate). Metoprolol is almost completely absorbed from the gastrointestinal tract. However, due to an extensive first pass effect, only 50% of the dose reaches the systemic circulation. In the liver metoprolol is primarily metabolized by cytochrome P450 2D6 (CYP2D6) into several metabolites. α-hydroxymetoprolol (Figure 1) is an active metabolite but possesses only around one tenth of the β1-blocking activity of metoprolol. Serum concentrations of α-hydroxymetoprolol vary depending on age and on the oxidation phenotype [1].
To determine metoprolol and its metabolite α-hydroxymetoprolol in serum for application in pharmacokinetics we needed a convenient and accurate method of analysis. Numerous methods of analysis have been reported for determination of metoprolol, with and without metabolites, in human plasma, serum or urine, including high performance liquid chromatography with UV or fluorescence detection [2-7] and gas chromatography with mass spectrometry [8]. In recent years several methods using liquid chromatography with tandem mass spectrometry have been published [9-15]. So far, liquid chromatography with high-resolution accurate mass spectrometry (MS) using Orbitrap technology has rarely been used for application in therapeutic drug monitoring and pharmacokinetics. The aim of the present study was to validate a simple, sensitive LC–MS method to quantify metoprolol and α-hydroxymetoprolol in serum for application in human pharmacokinetics.

The method was validated largely in accordance with the EMEA Guideline on bioanalytical method validation [16]. The validated criteria included selectivity, linearity, accuracy and precision, matrix effects and stability. The validation was performed with maximum tolerated bias and relative standard deviation (RSD) of 20% for the lower limit of quantitation and 15% for the other validated concentrations.

The selectivity of the method was determined by analysis of blank calf serum, blank human serum and serum from 6 different patients. Every sample was processed by the procedure as described in section 2.4. and injected into the chromatographic system in order to determine the extent of interference of endogenous serum components at the retention times of metoprolol, α-hydroxymetoprolol and IS.

Linearity and lower limit of quantitation

The precision and accuracy of the method were evaluated by assaying QC samples at 5 concentrations with 6 replicates for each concentration. Six replicates of each level were analyzed in a day or over 3 separate days by different analysts by performing the repeatability of the analysis. Precision was expressed as relative standard deviation (RSD, %), and accuracy was expressed as the relative error (RE, %) from the nominal value. The deviation in precision value (RSD, %) should be within 15% and accuracy (RE, %) should be within 15% from the nominal values, except for LLOQ, where it should not exceed 20%.

For use in clinical toxicology in our laboratory an ultra-high resolution accurate mass LC/MS assay for forensic toxicology screening in human serum was slightly modified [17]. The time of the gradient elution method was reduced to 15 min and sample preparation was performed with water-acetonitril 15:85, v/v. This clinical toxicology screening method was used for quantitative determination of metoprolol and α-hydroxymetoprolol. 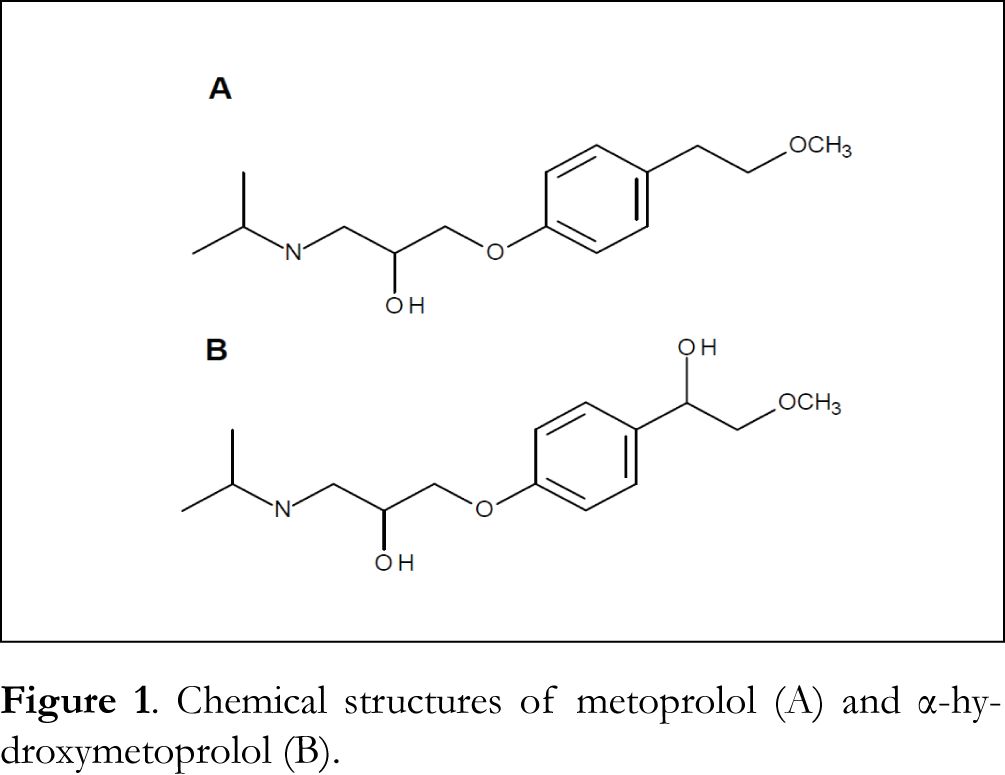 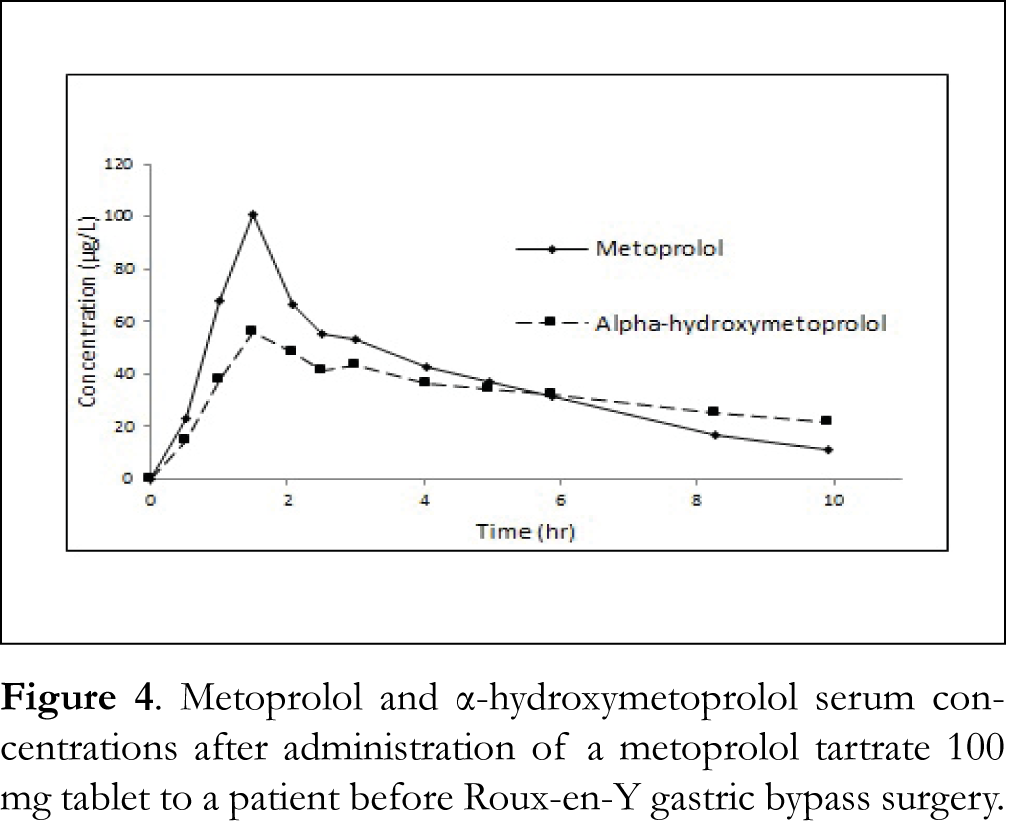 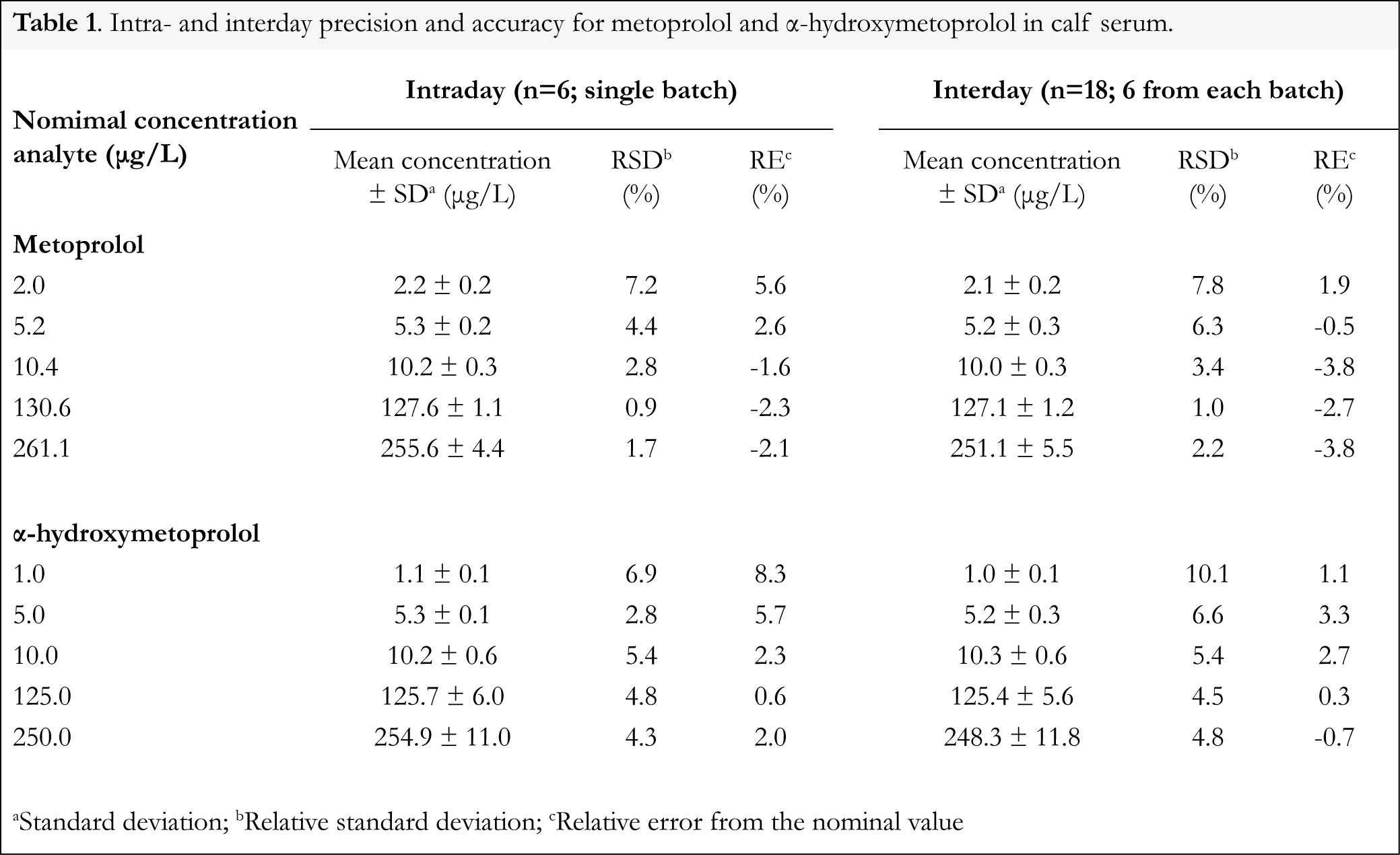 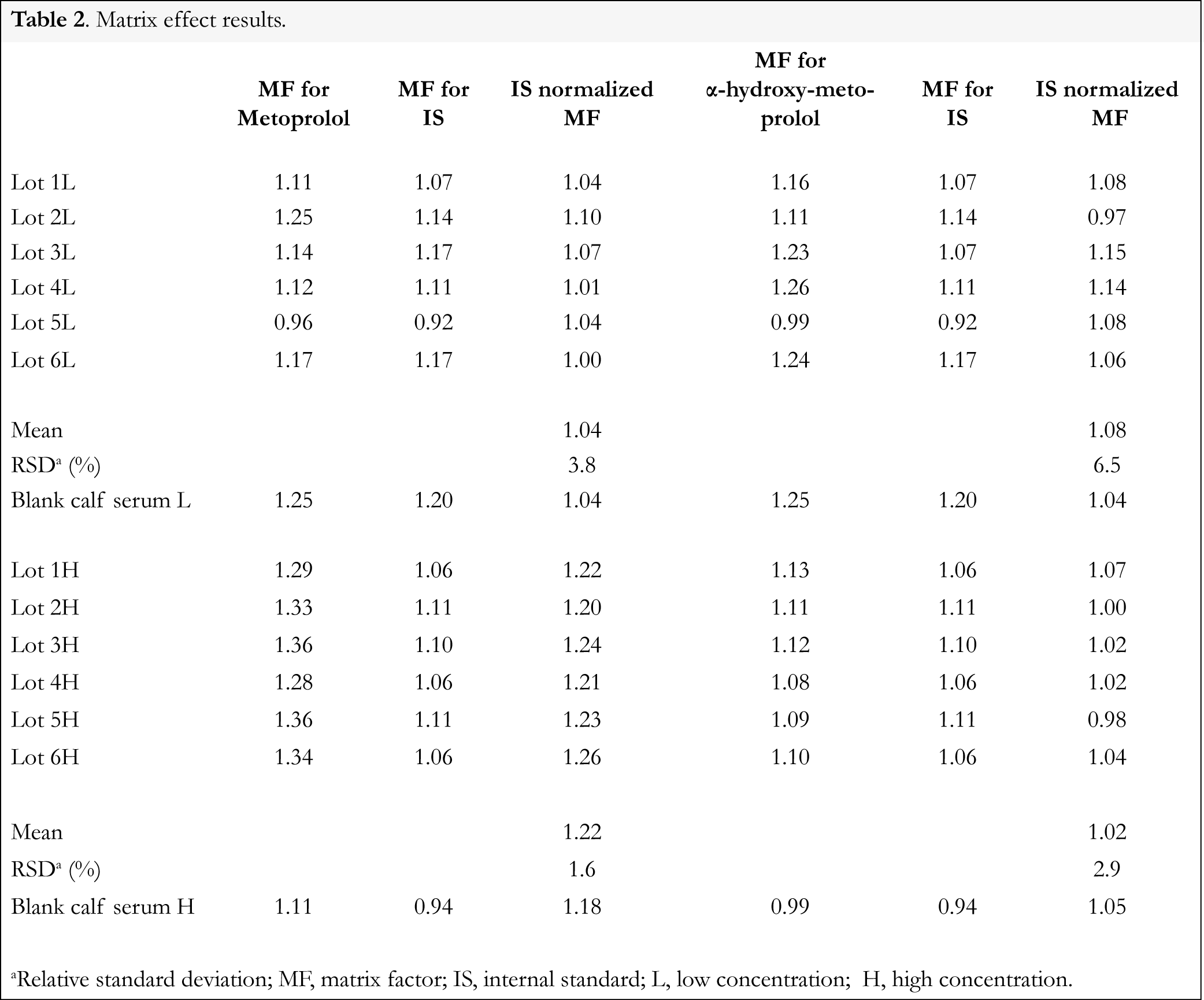 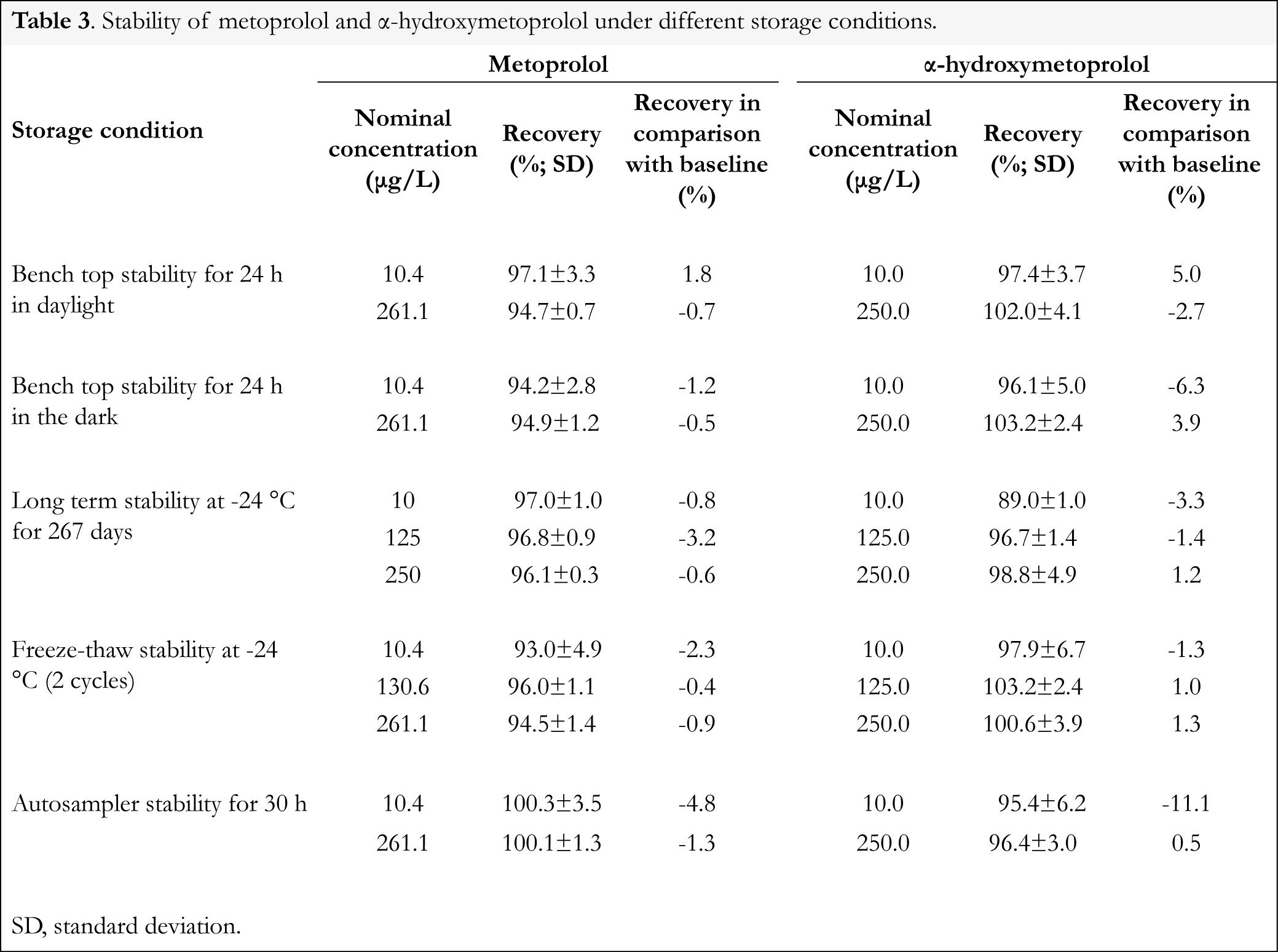 With a total run time of 15.0 min, metoprolol, α-hydroxymetoprolol and IS were exhibited at retention times of 7.7, 5.9 and 7.7 min respectively. Using water:acetonitrile (15-85, v/v) as a solvent for the precipitation of proteins in the sample processing, clean chromatograms were obtained with no significant matrix effect. Metoprolol, α-hydroxymetoprolol and IS gave protonated (M+H)+ ions at m/z 268.1907, 284.1856 and 275.2455 respectively in full scan spectra.

This method will be applied in clinical studies on the influence of Roux-en-Y gastric bypass surgery on the rate and extent of absorption of metoprolol from different oral formulations (Dutch Trial Register numbers NTR4000 and NTR4001). Results will be available shortly. Figure 4 shows serum concentrations of metoprolol and α-hydroxymetoprolol after administration of a metoprolol tartrate 100 mg tablet to a patient before surgery.

This validated LC-Orbitrap MS method for the simultaneous determination of metoprolol and α-hydroxymetoprolol in human serum was simple, selective, precise, accurate and reproducible. Absence of matrix interferences effects was adequately demonstrated. This method can be used for application in human pharmacokinetics.