A perspective on the sensitivity of paper-analytical devices for bioanalysis

Citation:
Giri B. A perspective on the sensitivity of paper-analytical devices for bioanalysis. J Appl Bioanal 2(1), 6-9 (2016).

Open-access and Copyright:
©2016 Giri B. This article is an open access article distributed under the terms of the Creative Commons Attribution License (CC-BY) which permits any use, distribution, and reproduction in any medium, provided the original author(s) and source are credited.

Paper-based microfluidic analytical devices (µPADs) have emerged as an attractive platform for chemical and biological sensing in past decade. Paper is made up of cellulose, which is hydrophilic and a permeable porous material consisting of microfibers of 1–100 μm diameter and pore size of 1–10 μm. Some characteristic features of cellulosic paper support the growing enthusiasm of µPADs. Paper has higher surface area to volume ratio and the microfiber network morphology has high loading capacity. The hydrophilic microfibers allow fluids and associated analytes to wick without any external force. The surface functionalization in this natural biocompatible polymer is well-established for attaching biomolecules. Paper microfiber network is suitable as a support for cells or microorganisms without causing adverse effects. The lateral flow assays are the early versions of μPADs that have been used for routine point-of-care diagnostics. The lateral-flow immunoassays (LFIA) such as those used for HIV detection, pregnancy, and drug tests are good examples of commercially available inexpensive rapid paper-based assays to detect disease biomarkers. The μPADs have been used in the quantitative analysis of a number of analytes in various areas, such as medicine, healthcare, and environmental monitoring. When compared to the conventional microfluidic analytical devices fabricated on silicon, glass, and superpolymer as substrates, the μPADs are low-cost, have simple fabrication processes, user-friendly, allow visible signal that is readable by eyes, and require less external instrumentations making them best suitable for resource-limited regions. [1] However, the growing demand for increased analytical sensitivity challenges the current format of μPADs assays, especially those involving colorimetric detection. Target biomolecules present at low concentrations require sample pretreatment, signal amplification, and detection methods to improve their limits of detection (LOD) and hence, enhanced sensitivity of μPADs becomes necessary so as to increase the power and wider applicability of μPADs in chemical- and bioanalyses.
The detection limits can be improved by increasing the signal to noise ratio of the assay. The signal can be increased either by preconcentrating target analyte molecules or the signaling molecules produced after the assay reaction or both. Even though several strategies have been explored for signal amplification on traditional microfluidic platform, especially for immunoassays [2], there have been only few efforts to improve the signal for μPADs. As this is a rapidly growing field, I expect more reports on novel ideas on increasing the sensitivity of μPADs methods coming in future. In this opinion piece, I discuss some of the major efforts that have been already made to improve the ability of paper-devices to detect trace concentrations of target analytes and future perspective in this area.

synthetic or natural based materials depending on their origin. Among the synthetic ones, molecularly imprinted polymers (MIPs) [10] and restricted access materials (RAMs) [11] can be highlighted. However, natural based materials comprising biomolecules are gaining special interest due to their enhanced selectivity (close to specificity) towards the target analytes [12]. Some of the biomolecules, like antibodies and enzymes, present selective cavities towards specific targets. Other biomolecules, like aptamers, can be in-vitro selected to bind the target in a very selective way [13].

The ideal microextraction technique in bioanalysis 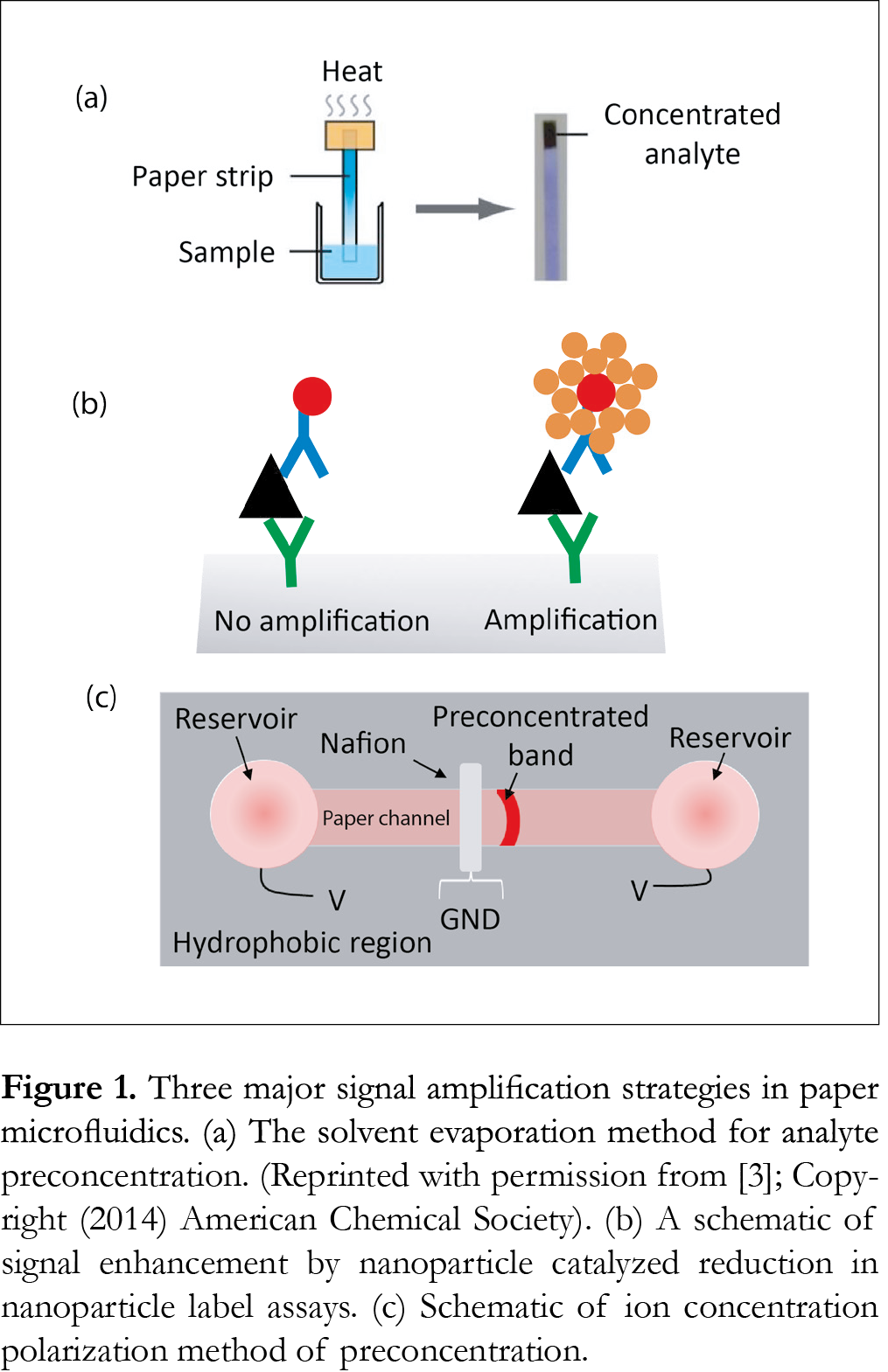 Paper as a platform for chemical and biological analyses has enormous potential. Its potential will rise with improvements in fabrication and analysis techniques in coming days. However, the sensitivity of the device appears to remain a frequently encountered limitation. Few papers published in past couple of years have shown very promising results and hope for increasing sensitivity of paper-based bioanalysis methods. Bioanalysis on paper-devices are known for their simplicity on fabrication and use, portability, are claimed to be best suitable for resource-limited and remote settings. Any efforts to enhance the sensitivity of these assays should not compromise on their above fundamental values. The major efforts discussed in this opinion ranged from solvent evaporation and gold amplification of nanoparticle label signals to electrokinetic methods. While non-electrokinetic methods discussed here do not involve extra instrumentations, most of the electrokinetic methods require electric field to induce sample flow and preconcentration and thus require additional instrumentation for power supplies and fabrication steps. In addition, the electrokinetic-based methods work only for charged samples. Future efforts may come up with small button battery powered μPAD electrokinetic systems to make the devices portable suitable for remote places. Once a paper-based assay is saturated, further analyte transport is generally not possible limiting the capture and thus concentration of more target molecules. The electrokinetic techniques can achieve post-wetting manipulation. Further, ITP on paper has the ability to process large sample volumes that can be utilized to analyze dilute but large sample volumes. The electrochemical detection in paper-device are also widely used but need to have amplification strategies to increase the sensitivity in addition to incorporating portable and hand-held external power and potentiostat [17]. Sensitive paper-analytical methods have great potential in future. This technology potentially could transform the current state of diagnostic assays for various diseases such as malaria, human immunodeficiency virus, tuberculosis, especially, in resource-poor settings, ultimately saving millions of lives and on field testing of environmental pollutants.