Open-access and Copyright:
©2015 Kleinnijenhuis AJ et al. This article is an open access article distributed under the terms of the Creative Commons Attribution License (CC-BY) which permits any use, distribution, and reproduction in any medium, provided the original author(s) and source are credited.

In this study, we developed a generic bioanalytical workflow providing sensitive, specific, and accurate absolute quantification of therapeutic monoclonal antibodies in serum. The workflow involves magnetic beads coated with protein A to pull-down therapeutic monoclonal antibodies with affinity for protein A from the biological matrix, followed by tryptic digestion and LC-MS/MS quantification of a unique signature peptide, considering of course the matrix of interest and other present mAbs, if applicable. The feasibility of this approach was demonstrated for Infliximab (trade name Remicade) in rat serum. The assigned signature peptide was monitored in the selected reaction monitoring (SRM) mode. Assay variability was determined to be below 20%, except at the QC low level, which was provided through optimization of the sample preparation and monitoring of the LC-MS/MS using a stable isotope labeled signature peptide as internal standard. The 100 ng/ml lower limit of quantification using only 25 µl sample volume, is generally considered as sufficient for pharmaceutical development purposes for monoclonal antibodies.

In order to quantify proteins in complex biological matrices such as serum or plasma, LC-MS/MS is finding its way to the bioanalytical community [1-6] as a complementary method to ligand binding assays (LBA). Advantages of LC–MS over LBA are that no highly selective biological reagents have to be developed, which can take up to six months to generate and possibly less complications due to immunogenicity [4,7-10]. In contrast to LBAs, the conventional standard for therapeutic protein bioanalysis, which measures the unbound intact 3D domain of the therapeutic protein binding to the assay’s capture reagent, LC–MS measures a unique part of the primary structure of the protein. We developed a generic workflow consisting of immunoprecipitation, using protein A capture followed by LC–MS/MS quantification of a unique signature peptide after tryptic digestion of the target therapeutic monoclonal antibody (mAb) in biological matrices [11]. To optimize the generic approach the “seven critical factors” approach was followed [5]. Essential to the generic methodology are magnetic beads, functionalized with protein A, a 42 kDa surface protein originally found in the cell wall of the bacterium Staphylococcus aureus which binds immunoglobulins. Protein A can be suitable to purify classes, subclasses and fragments of immunoglobulins as well as immunoglobulin complexes [12] when the immunoglobulin of interest has a high affinity for protein A as compared to other affinity capture materials. As a result of the ability of Protein A to capture immunoglobulins it is suitable to concentrate therapeutic monoclonal antibodies which are usually immunoglobulin based. The digestion is combined with disulfide bond reduction and alkylation. To demonstrate the feasibility of this approach, Infliximab (trade name Remicade), a chimeric monoclonal antibody against tumor necrosis factor alpha (TNF-α) used to treat autoimmune diseases, was used [13].

Preparation of calibration and QC samples

Calibration standards were prepared by serial dilution of Infliximab to 0.05, 0.10, 0.20, 0.50, 1.0, 2.5, 10 and 25 μg/ml using rat serum from a 10 mg/ml stock solution. Quality control samples (QCs) were used to evaluate the accuracy and precision during the qualification and were prepared in the same way as calibration standards at 0.10, 0.25, 2.0, and 10 μg/ml. The stable isotope labelled analogue DILLTQSPAILSVSPGER [13C615N4]  used as internal standard (IS) was added to calibration standard and QCs during sample preparation, after elution from the beads. All samples were submitted to the immunocapture and digestion steps prior to LC-MS/MS analysis.

For each sample 50 µl protein A magnetic beads was used. After removing the storage buffer and washing, 25 µl sample volume was loaded (60 min) on the beads in 200 µl PBS (phosphate buffered saline). A magnetic stand (Millipore) was used to separate the beads from the solution. After washing, proteins were eluted from the beads using 50 µl 100 mM glycine, pH 2.5. After removal of the beads, the pH was raised with TRIS (pH 8) and internal peptide solution was added (24 ng/ml end concentration). After reduction with dithiothreitol (50 mM end concentration) and alkylation with iodoacetamide (85 mM end concentration), trypsin (20 µg) was added in ammonium bicarbonate and the samples were incubated for 2.5 hours at 37°C. Finally, acetonitrile, formic acid and trifluoroacetic acid were added at final concentrations of respectively 10%, 1% and 0.5% to give an end volume of 205 µl.  Samples were transferred to an HPLC vial and injected (10 μl) into the chromatographic system.

Digestion was carefully optimized since many factors, such as pH, ionic strength, temperature, and incubation time, can influence the efficiency of proteolysis. We chose TCPK-trypsin, which exhibits limited self-digestion and retains its activity over a long period. The optimal protein digestion was obtained at pH~8 in 100 mM ammonium bicarbonate buffer at a temperature of 37°C for 2.5 hours using 20 μg of trypsin. Protein denaturation was obtained by heating to 95°C, reduction was performed by addition of 50 mM dithiothreitol and incubation for 20 minutes at 56°C and alkylation was optimized by addition of 85 mM iodoacetamide and incubation for 30 minutes at ambient temperature in the dark.

UPLC Chromatography was performed on an Acquity UPLC (Waters) using an Acquity HSS T3, 50 x 2.1 mm, 1.8 µm column (Waters). The column was eluted at a flow rate of 0.8 ml/min using as mobile phase A MilliQ water and as mobile phase B acetonitrile, both containing 0.1% (v/v) formic acid. The analytical gradient profile was as follows:

Selection of peptides for quantification

The strategy for quantification involved the selection of tryptic peptides from the variable regions of both the light and heavy chains. The corresponding sequences were submitted to similarity searches (Protein BLAST)[14] to ensure detection specificity. Table 1 lists all the potential peptides after in-silico digestion and BLAST searches vs. the species Rattus Norvegicus.
The following peptide selection criteria were applied:
-Length between 6 and 20 amino acids
-No adjacent tryptic cleavage sites
-No methionine or cysteine in the peptide sequence
-No asparagine followed by glycine or serine
-Peptide contains part of variable domain 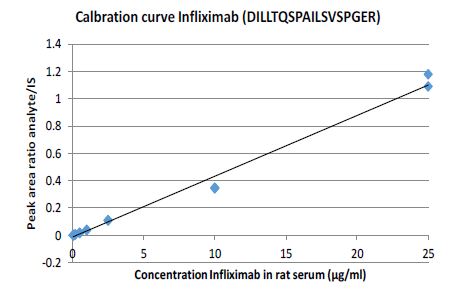 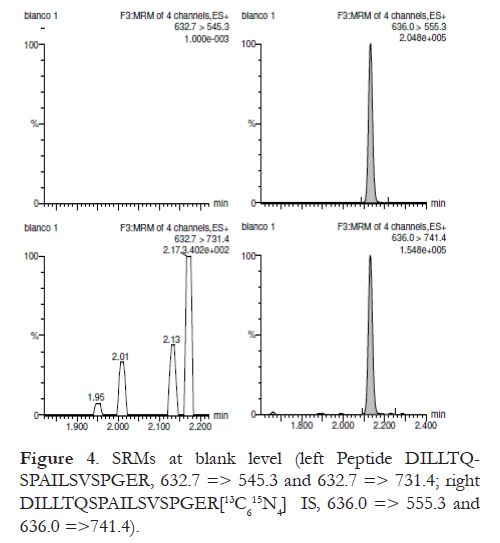 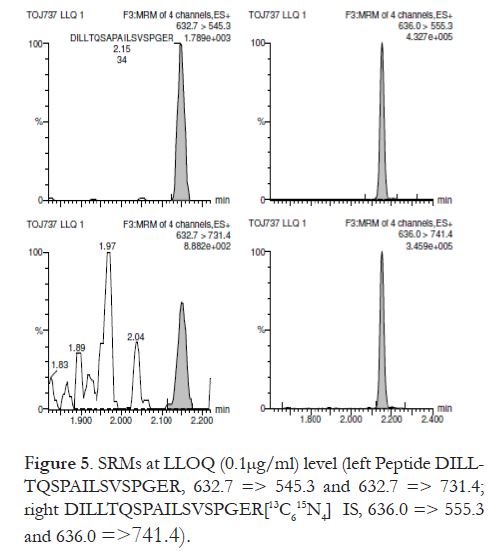 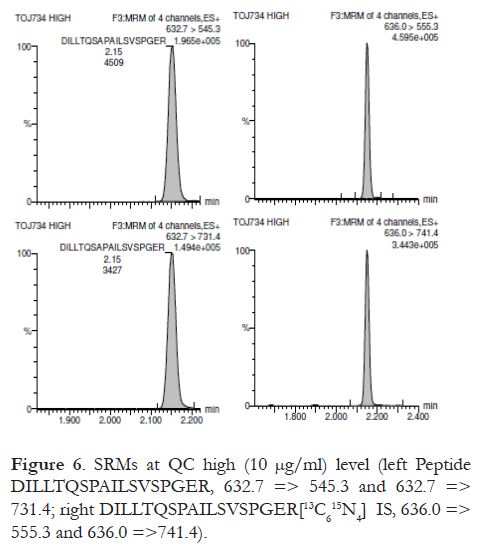 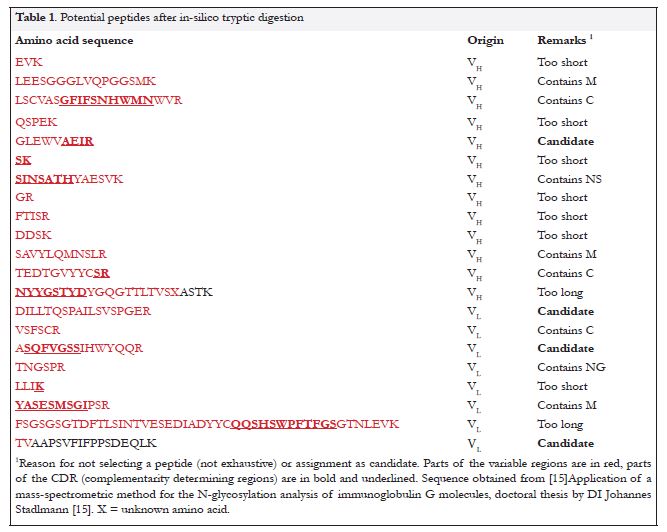 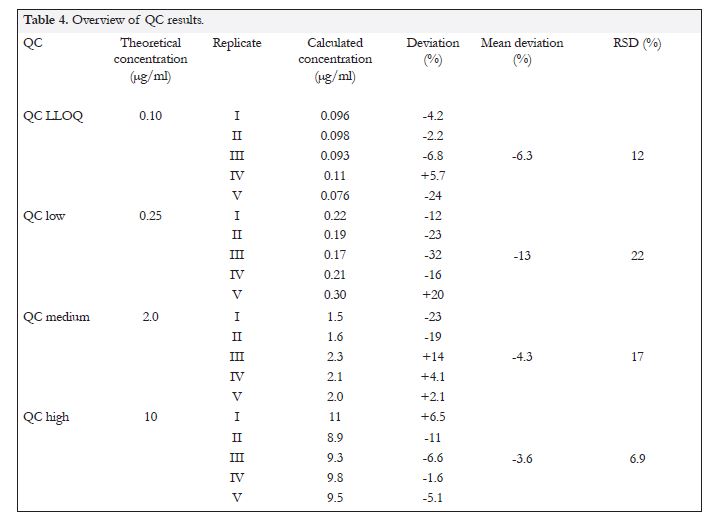 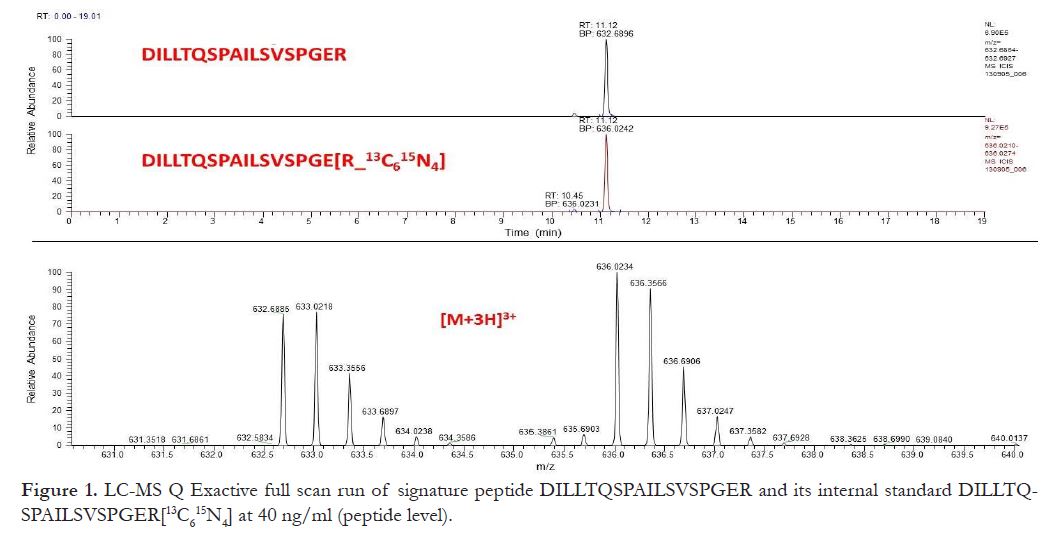 There are several other relevant peptide selection criteria, which were not found to be relevant for Infliximab and were thus not applied. Table 2 lists the results of the database search.The first practical step of the development was to identify specific peptides with the most intense MS signal, among those produced by digestion. These different peptides were monitored in an exploratory LC-MS run of an Infliximab digest using the Q-Exactive in the full scan mode. Peptide DILLTQSPAILSVSPGER exhibited a signal approximately three times higher than peptides ASQFVGSSIHWYQQR and TVAAPSVFIFPPSDEQLK. Finally, peptide DILLTQSPAILSVSPGER was selected for further experiments based on sensitivity and chromatography (e.g. peak shape), see Figure 2. A stable isotope labeled analogue of DILLTQSPAILSVSPGER was synthesized to serve as internal standard.

We selected magnetic beads coated with protein A to pull down Infliximab via its human Fc part. The approximate absolute recovery observed after all the purification, reduction, alkylation and digestion steps was 30%, calculated using the theoretical internal standard concentration in the end extract and the theoretical concentration of the analyte peptide from Infliximab in the end extract, according to the equation below (Eq. 1)

Where R is the recovery in %, Cprot the concentration of protein in serum in ng/ml, MWpep the average molecular weight of the signature peptide in Da, MWprot the average molecular weight of the protein in Da, Dprot the protein dilution factor or the ratio between sample end volume and loading volume, CIS the concentration of the added IS solution in ng/ml, DIS the IS dilution factor or the ratio between end volume and added volume, Sanal the signal obtained for the analyte signature peptide and SIS the signal obtained for IS peptide.The results shown in this paper indicate that even with a relatively low absolute recovery, accurate results (with good relative recovery) can be obtained when quantifying proteins using calibration samples which have been prepared with the analyte protein in the matrix of interest and subjecting these to the same conditions as the study samples and QCs. A way to further optimize the repeatability of the method would be to load the protein A beads with stable isotope labeled protein internal standard instead of fortifying with peptide internal standard after elution of the proteins from the beads [16,17]. The parameter which requires further optimization in the presented method is the elution step from the protein A beads. When the protein A beads were subjected to another round of tryptic digestion a significant residual signal was observed for DILLTQSPAILSVSPGER (results not shown). In our experience, the elution step from the protein A beads was also critical in the method development for other monoclonal antibodies (results not shown). It is recommended to optimize these conditions instead of using the standard elution conditions described in protein A protocols.

Optimization of LC-MS/MS method for DILLTQSPAILSVSPGER

The most optimal transitions for DILLTQSPAILSVSPGER were selected on the basis of signal, background noise and chromatographic separation characteristics in the presence of matrix background. It should be noted that for DILLTQSPAILSVSPGER the most prominent charge state ([M+2H]2+ or [M+3H]3+) could change during method optimization. Especially, when a sensitive method is required, it is important to follow different precursor ion charge states during method optimization, also for other signature peptides. The results obtained with the calibration samples (prepared once, analyzed twice) are shown in Table 3 and the results of the QC samples are shown in Table 4.

The obtained calibration curve is presented in Figure 3.
Six blank serum samples of individual rats were analyzed, which exhibited a very low  background signal in the SRM transition of triply protonated DILLTQSPAILSVSPGER at QC LLOQ level.

In Figures 4-6 typical chromatograms are shown for blank rat serum, QC LLOQ and QC high samples, respectively. The obtained RSD for the QC low level was higher than 20%, although the RSD was lower than 20% (12%) when the results were calculated with the preset qualifier ion for DILLTQSPAILSVSPGER.
Using the preset qualifier ion, however, the RSD for the LLOQ level was higher than 25% (28%). The presented method would therefore require further optimization prior to full validation according FDA or EMA guidelines.

This work presents an LC-MS/MS method for the quantification of the therapeutic monoclonal antibody Infliximab in rat serum. The approach is based on immunoprecipitation, tryptic digestion of Infliximab, and LC-MS/MS quantification of the signature peptide DILLTQSPAILSVSPGER and its stable isotopically labeled analogue IS. With state of the art UPLC and triple quadrupole instruments, a lower limit of quantification was of 100 ng/ml in rat serum was readily achievable, as illustrated in Figure 5. Since the peptide DILLTQSPAILSVSPGER originates from the variable region, it can also be utilized as a signature peptide for the quantification of Infliximab in higher order species, including Homo sapiens.

The authors would like to thank M. el Amrani from the University Medical Center in Utrecht for collaboration and for providing Infliximab solution.